EXPLOSIONS IN CHINA– At Least 6 Dead in Xinjiang Province

On Thursday Chinese Islamists issued a threat against Chinese interests during the Beijing Olympic Games.

This morning several people were killed when terrorists attacked police officers and a police station in Kuqa. 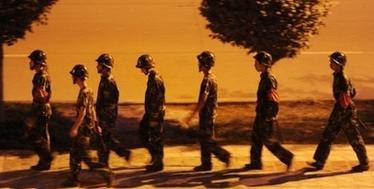 Several Explosions were reported in Xinjiang Province in China today.
At least 4 were killed when a man drove a truck into a group of police officers as another man threw explosives at a police station in Kuqa!
4 or 5 “suspects” were killed or injured in the attack.
Bloomberg reported:

A man drove a truck into a group of 70 police officers exercising outside the station in Kuga country, in the Xinjiang Uygur Autonomous Region, as another man threw explosives at the building then brandished a knife at officers, the state-run Xinhua News Agency reported. The number of people killed may rise, the report said.

It said there was sporadic gunfire after the blasts, but there were no immediate reports of casualties.

Earlier this week, 16 Chinese policemen were killed in an attack on a border post in the province, Xinhua reported.

Xinjiang is home to the Muslim Uighur people. Uighur separatists there have waged a low-level campaign against Chinese rule for decades.

Earlier this week radical Islamists from the Turkistan Islamic Party (TIP) issued a threat against the Beijing Olympics, and urged Muslims not to attend the games or be within the vicinity. TIP is linked to Al-Qaeda.

16 Chinese police were killed in a terrorist attack in the northwestern Chinese town of Kashi in Xinjiang last Monday.

UPDATE: ABC News is reporting that 6 were killed in the blasts.

UPDATE 2: 8 people were killed in numerous attacks.
Michelle Malkin and The Guardian reported:

In what appears to be one of the most widely coordinated assaults in recent memory, the militants threw or carried home-made explosives into a dozen government sites in Kuqa city, killing a security guard, injuring two police officers, destroying two police cars and damaging trading and commerce offices.

Their most ambitious assault involved wheeling a tricycle laden with explosives into a public security bureau just before dawn. One attacker was shot, another blew himself up and two were captured,
according to the state-run Xinhua news agency.

Six hours later, police tracked down some of the alleged militants in the local marketplace. In the ensuing battle, two militants were reportedly shot and three blew themselves up with bombs made from bent pipes, gas canisters and liquid gas tanks.