Denver officials completed the construction of the DNC “Freedom Cage” near the convention center in Denver. Protesters are encouraged to use the cage “during the first three days of the convention as long as they would leave by 3 p.m.” before the convention starts up.

Drunkablog brings you the first pictures of the DNC “Freedom Cage”, the shockingly small enclosure that was put up overnight in Denver: 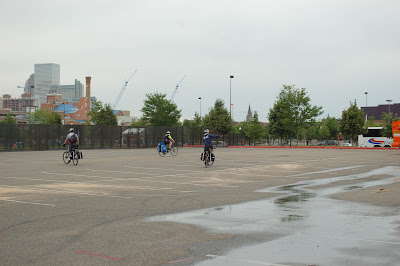 Hard to tell from the pictures, but the enclosure is almost shockingly small:

A medic team on bikes was exploring the space. And snickering.

So what exactly is the DNC “Freedom Cage” and how do protesters feel about it?
CBS4 explained:

A 50,000-square-foot demonstration zone that will have two layers of chain-link fences wrapped around it during the Democratic National Convention has been deemed the “freedom cage” by the leader of a group planning to march during the four-day event.

“We plan to go in that zone once only to protest its existence,” said Mark Cohen, co-founder and organizer of advocacy group Recreate 68. “When the media presents images of demonstrators in the demonstration zones in relationship to the Pepsi Center, the public will see what could look like prisoners.”

Cohen’s comments came Tuesday during a day-long trial over whether the city’s designated parade routes and a demonstration zone in a Pepsi Center parking lot meets protesters’ free speech rights.

Thomas Mestnik of Recreate 68, which plans at least five marches during convention week, said free speech means a group can be within sight and sound of where it wants its message to be delivered.

The American Civil Liberties Union of Colorado and more than a dozen advocacy groups argue in the suit that the parade route and demonstration zone keep protesters from being seen or heard by delegates entering the Pepsi Center, where the convention begins Aug. 25. Denver and the Secret Service are named as defendants.

Denver’s plan would allow protesters to get as close as a parking lot on the Pepsi Center’s grounds during the first three days of the convention and they would have to leave by 3 p.m., about the time delegates are expected to begin arriving each day.

The cage uses a double fence design so protesters cannot get too close to the DNC delegates and elitists.

This was cross posted at Founding Blogggers.