Hillary Clinton supporter Philip Berg filed suit this week in US District Court to have Barack Obama removed from the ballot. 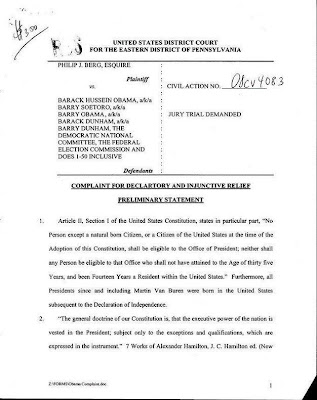 Here is the front page (the whole document is posted here) from the suit filed in the Eastern District of Pennsylvania against by Philip Berg against Barack Obama.

Jeff Schreiber at America’s Right has been following this explosive news from Pennsylvania:

A prominent Philadelphia attorney and Hillary Clinton supporter filed suit this afternoon in the U.S. District Court for the Eastern District of Pennsylvania against Illinois Sen. Barack Obama, the Democratic National Committee and the Federal Election Commission. The action seeks an injunction preventing the senator from continuing his candidacy and a court order enjoining the DNC from nominating him next week, all on grounds that Sen. Obama is constitutionally ineligible to run for and hold the office of President of the United States.

“I filed this action at this time,” Berg stated, “to avoid the obvious problems that will occur when the Republican Party raises these issues after Obama is nominated.”.

Berg cited a number of unanswered questions regarding the Illinois senator’s background, and in today’s lawsuit maintained that Sen. Obama is not a naturalized U.S. citizen or that, if he ever was, he lost his citizenship when he was adopted in Indonesia. Berg also cites what he calls “dual loyalties” due to his citizenship and ties with Kenya and Indonesia.

The Fight the Smears website still insists that the legitimate Barack Obama birth certificate is posted here.
It could be a very interesting convention this week.
Hat Tip BG