I thought he was dead? 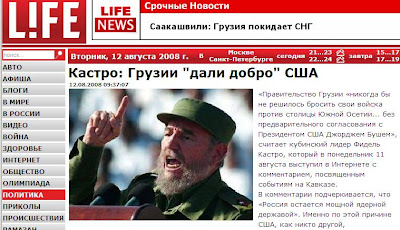 Israel Without Ifs or Buts translated:

The government of Georgia would never send its soldiers to the capital of South Ossetia… without preliminary coordination with the President of the USA, George Bush, Cuban leader Fidel Castro said on Monday, August 11th.

Related… Today’s Pravda editorial: “Bush: Why don’t you shut up?”
Here’s a slice:

Why don’t you shut up? Do you really think anyone gives any importance whatsoever to your words after 8 years of your criminal and murderous regime and policies? Do you really believe you have any moral ground whatsoever and do you really imagine there is a single human being anywhere on this planet who does not stick up his middle finger every time you appear on a TV screen?

I don’t.
But, I do have a problem with the Russian defense representatives meeting secretly with Saddam Hussein just days before the 2003 invasion detailing US military plans.