But, He’s Not An Elitist…
Those bitter gun-toting, Bible-thumpers in the sticks ought to love this. 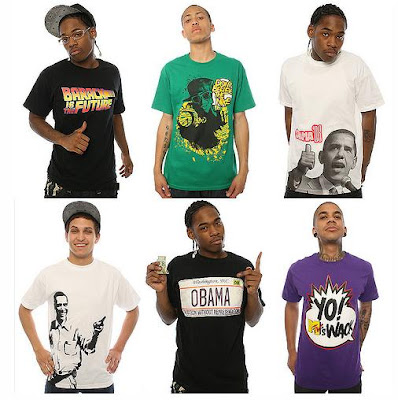 Top international fashion designers hope to lend a bit of runway panache to the Obama brand. (Sons of Liberty)

The Obama campaign has actively sought out top fashion designers to create fabulous merchandise for the those fashion savvy voters.
The Washington Post reported:

Now it is enthusiastically and abundantly about style. The Barack Obama campaign, which has been actively courting the fashion industry, has coordinated some 20 or so designers who are creating official merchandise for the candidate’s Web site. It is the first time, as far as Seventh Avenue long-timers can recall, that a quorum of the fashion industry has organized its financial resources and creative energy around a single presidential candidate.

The mix, available online next month, ranges from T-shirts to tote bags and will lend a bit of runway panache to the Obama brand. The list of participating designers, which includes Derek Lam, Isaac Mizrahi, Tracy Reese, Charles Nolan and Diane von Furstenberg, covers the full spectrum of the market, from high-end to inexpensive. Other names have been bandied about but not confirmed: Beyoncé, Russell Simmons, Michael Bastian, Vera Wang.

Few entrepreneurs are as adept at brand building and buzz creation as fashion designers. Theirs, after all, is the industry that transformed velour sweat suits into the status symbol known as Juicy Couture. Denim manufacturers convinced shoppers that there was nothing wrong with regularly paying $200 or more for a pair of artfully distressed jeans. And accessories designers prompted otherwise rational women to invest thousands of dollars in “it” handbags that contained neither that much leather nor that much labor.

All of the smoke-and-mirror marketing, prescient creativity and business acumen have the New York fashion industry generating $47 billion in sales annually. Imagine how much gloss fashion folks could apply to the Obama brand.

UPDATE: Nahanni wants to know when when they are going to roll out Obamalicious Bruschetta flavored Arugula Crisps. Hah!