OBAMA CAMP BUSTED!!
The Obama Campaign is behind the Sarah Palin Smear Website! 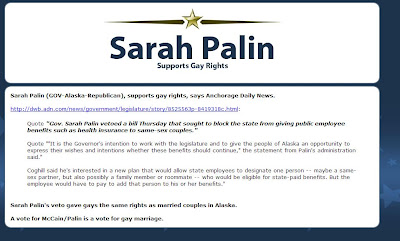 It was set up by the Obama Campaign and Charles Johnson has the proof.

Interesting. There’s nothing else on the page. This sure looks like the work of the dastardly right-wing anti-gay attack machine, doesn’t it?

But look who’s really behind this.

In the Linux console, if you enter the following commands, you can learn the secrets of a political dirty trick. First, look up the host of ‘sarahpalingayrights.com’ to get the site’s IP address.

Then use the same command to look up the domain name pointer of that IP address.

And what happens if you enter obamadefense.com on your browser’s address line?

Why, you’re redirected to none other than FightTheSmears.com, the official Barack Obama site that’s supposed to be defending him against smears.

Looks like they may have a second purpose: to generate a few smears of their own.

It all leads back to The One.
Amazing. 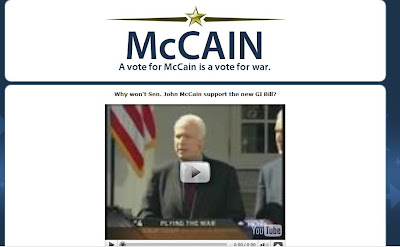 They even used the same template!

Interesting. Very, very interesting. The company that owns those is 1&1 Internet Inc. They also have a UK branch called 1&1 Internet Ltd. And they appear to be dirty as all hell –

Still wading through links, but there are some disturbing allegations.

Doing a little free research. From DNS Stuff’s search, we get:

So, enter that URL, so go down, and we get the admin contact. I won’t post the address here, as that’s not nice.

But, go drop that address into a reverse address lookup (411.com) and you get:

Now, do the same for obamadefense.com gives the same street address.

From CNN’s Blog’s, there is a poster there saying this Suzanne is a Republican. I’ll end research there while I try to figure out more.

Another connection to the “Obama Smears” Website, via Locke/Demosthenes at LGF:

I have no idea if this means anything, but you mention that Suzanne Hendrix is the head of Obamadefense.com as well as sarahpalingayrights.com.

The CNN blog you link to says that she is also the head of pumapac.

Guess what else was registered on June 4? fightthesmears.com

Charles says Szanne Hendrix has nothing to do with the websites he linked to.

Update: It appears the websites were created by a hardcore Obamatron but cannot be linked directly to the Obama Campaign at this time.