More bogus claims from the regime in Iran…
This time an Iranian minister was caught pushing a bogus diploma he said was from Oxford University– complete with misspellings. 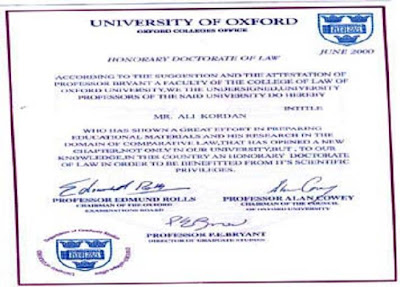 Click to Enlarge
A photo copy of the bogus University of Oxford diploma was posted on the asriran website.

The new Iranian Interior Minister was caught pushing a bogus diploma he said he received from Oxford University in 2000.
Copies of the diploma, with misspellings and garbled wording, were even distributed to the Iranian media.
Lawhawk and YNET News reported:

Iran’s new interior minister has raised an uproar among lawmakers and Iranian media over an apparently fake claim that he holds an honorary doctorate from Britain’s Oxford University. To back his case, he’s shown off a degree certificate riddled with spelling and grammar mistakes.

Oxford issued a statement Wednesday denying it ever awarded Ali Kordan (pictured) an honorary doctorate of law, as he claimed to parliament before it approved his appointment to the post earlier this month.

The Interior Ministry put out a copy of the degree, with an Oxford seal and dated June 2000, aiming to prove its authenticity.

But in the certificate, “entitled” is misspelled “intitled,” and it says Kordan was granted the degree “to be benefitted from its scientific privileges.”

The clumsily worded document says Kordan “has shown a great effort in preparing educational materials and his research in the domain of comparative law,that has opened a new chapter,not only in our university,but, to our knowledge,in this country” – leaving out spaces after all but one of the commas. It was published in several Iranian papers this week.