British ITV News reporter John Ray was roughed up and arrested today in Beijing for covering a Free Tibet protest near the national stadium. 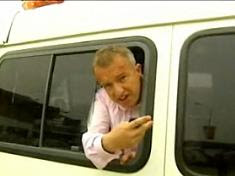 Here John Ray continues to report on the story from the window of the police van as it whisks him away.

Chinese police roughed up a British reporter today for filming a small Free Tibet protest near the national stadium in Beijing.
ITN reported:

Eight Free Tibet campaigners have been arrested during a protest at which a British journalist was also held. ITV News reporter John Ray was arrested and released soon after the incident at the Chinese Ethnic Culture Park, near the National Stadium.

He was taken away by police as members of the campaign group handcuffed themselves to each other and bicycles.

Mr Ray, who has been based in Beijing since 2006, is ITV News’ first China correspondent. ITN, which makes ITV News, said it would be making the “strongest possible” protest. A spokesman said: “John Ray is a fully accredited China correspondent who was doing his legitimate job as a journalist.

A spokesman said: “The IOC has learned through media reports that a British journalist was allegedly assaulted today while covering a demonstration near an Olympic venue in Beijing.

“We intend to protest in the strongest possible terms to the Chinese authorities and seek assurances that the treatment meted out to Mr Ray will not be repeated.”