The National Black Republican Association welcomed Barack Obama to Denver this week with over 50 billboards: 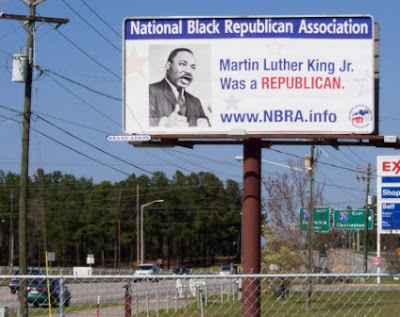 The Black Republicans released this statement on Barack Obama:

Forty-five years ago, on August 28, 1963, The Reverend Dr. Martin Luther King, Jr. who was a Republican and embraced the traditional values that made this country great delivered his inspirational civil rights “I Have a Dream” speech.

Today, Senator Barack Obama, with the most liberal voting record in the US Senate, is delivering his political acceptance speech, in an apparent attempt to assume for himself the mantle of Dr. Martin Luther King.

Dr. King did not embrace the type of secularist agenda promoted by Obama and the Democratic Party of today, which includes fostering dependency on welfare that breaks up families, supporting same-sex marriage and partial-birth abortion, and banning God from the public square.

Obama is no MLK!

They must be racists.
It’s the only explanation.