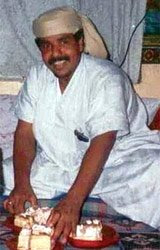 Osama bin Laden’s chauffeur has been found guilty of supporting terrorism, in the first verdict to be delivered by the US’s war crimes tribunal at Guantanamo Bay.

But the jury of six US military officers found Salim Hamdan, a Yemeni, not guilty on a second charge of conspiracy, after three days of deliberations. He now faces a potential life sentence.

It follows a two-week military trial at the US naval base on Cuba – the first war crimes trial in the US since the Second World War.

Hamdan, estimated to be aged about 40, was arrested in Afghanistan in November 2001, soon after the US invasion which deposed the Taleban regime that was harbouring Mr bin Laden and his al-Qaeda associates.

Lawhawk says Salim Hamdan guilty of three charges, which could put him in prison for life.

During the trial… It was revealed that Hamdan blamed the weak actions of the Clinton Administration for emboldening Osama Bin Laden .
This was ignored by the media.

Michelle Malkin is following the trial.
JWF calls it a dark day for terror supporters and ACLU types.

UPDATE: That didn’t take long. The ACLU is crying over Hamdan’s conviction.