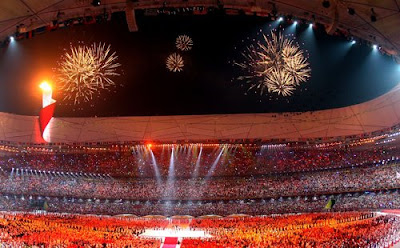 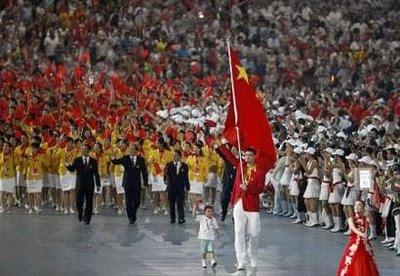 Nine-year-old earthquake survivor Lin Hao joined Yao Ming (R) during the opening ceremony. Lin Hao is a primary school student from the quake-affected zone of southwest China’s Sichuan Province. According to media reports, when the May 12 tremor struck, Lin risked his life and suffered multiple injuries for rescuing his schoolmates from the collapsed buildings. He was later awarded the title of “Teenage Hero in Earthquake Rescue and Relief.” (China Daily) 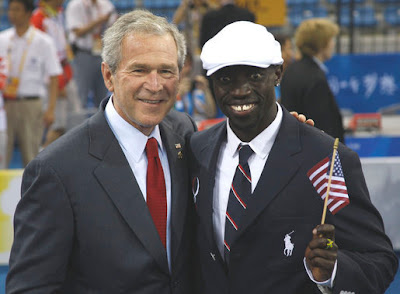 President George W. Bush poses for a photo with U.S. Olympic runner Lopez Lomong Friday, Aug. 8, 2008, in Beijing prior to Opening Ceremonies of the 2008 Summer Olympic Games. Lopez Lomong, a survivor of the violence in his native Sudan, now a U.S. citizen, was selected by his teammates to lead the U.S. Olympic team into Olympic National Stadium carrying the United States Flag at the Opening Ceremony. (White House photo by Eric Draper)

It was wonderful to see the Beijing crowd give the Iraqi athletes a boisterous ovation.
The Iraqis were allowed into the games just last week after the IOC originally banned the delegation… The IOC wanted the original Iraqi committee members to represent the team. But, 4 members were kidnapped two years ago and have not been seen since that time.
.

The beautiful woman in the Iraqi delegation is sprinter Dana Abdul-Razzaq.
President Bush and Laura Bush joined in the ovation.
UPDATE: I posted the Iraqi version after the NBC clip was yanked.

Meanwhile… Iranian religious figures have criticised the choice of Olympic female rower Homa Hosseini as the flagbearer for Iran, calling the move a ‘heresy’.

Final thoughts on the Opening Ceremony– Amazing! China put on a wonderful show.
NBC also did a fine job with their production of the event. They managed to keep their liberal bias in check for the most part. I, for one, was pleased that they did not skip any of the teams during the parade of nations. The little maps they displayed were also helpful.
China must be very proud of this remarkable presentation.