Considering that Barack Obama, as chairman of an Illinois State Senate committee, voted down a bill to save live-born survivors of abortion, something even the most liberal politicians in Washington would not do, the latest news from the Obama-led Democratic Party is really no surprise. 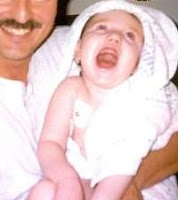 Baby Sarah survived an abortion. During the attempted abortion, Baby Sarah turned away from the needle. Instead of injecting the lethal drug into Baby Sarah’s heart, the drug injected it into the side of her head. This left her alive but blind.
Barack Obama would not have saved Baby Sarah.

In the hopes of attracting more Christian voters, the media is spinning that Obama is “Wooing Abortion Foes With Platform Embracing Motherhood .” Of course, this is not accurate. In fact, Barack Obama’s abortion position argues harder for abortion on demand than the earlier Clinton platforms did.
Judith Warner at The NY Times, via HotAir explained:

There is nothing new in the Democratic position. The abortion plank’s first sentence, “The Democratic Party strongly and unequivocally supports Roe v. Wade and a woman’s right to choose a safe and legal abortion, regardless of ability to pay, and we oppose any and all efforts to weaken or undermine that right,” is, arguably, the most powerful statement in favor of abortion rights that the party has ever made. Some pro-choice activists find it less grating to the ear than the old Clintonian formulation, which promised in the 2004 party platform to make abortion “safe, legal, and rare.”