You know what that means…
It’s time for a “We’re going to destroy Israel,” speech! 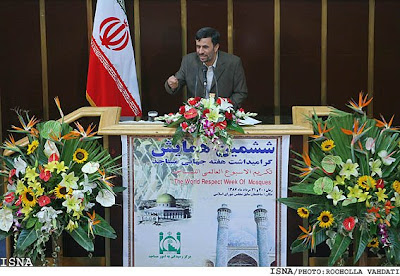 In celebration of this grand occasion Iranian President Mahmoud Ahmadinejad promised to dismantle Israel in the very near future.
The Iranian Republic New Agency reported:

President Mahmoud Ahmadinejad here on Wednesday advised the leaders of European countries and the US not to yield to the Zionists’ demands and never count on their support because “We will witness dismantling of the corrupt regime in a very near future.”

President Ahmadinejad made the remarks in the sixth conference held on the occasion of “World Mosque Week” in Tehran.

Mosques and friday prayers sermons are all aimed at organizing political and social developments in Islam, he said.

Mosques play pivotal role in connecting man with his Creator and no organization in the world can play such a significant role, he said.

The 9th government pays due attention to the significant role of mosques in the society, said President Ahmadinejad.

It was a lovely speech.