The US Embassy bombings in Tanzania and Kenya. 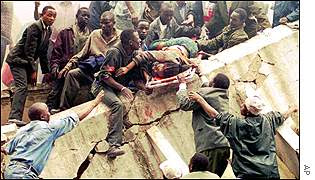 At least 223 people were killed in the attacks.
Several hundred were wounded.
Al-Qaeda took responsibility.

It was revealed during the Salim Hamdan trial this month that the weak actions by the Clinton Administration after these embassy attacks and other terror attacks emboldened Osama Bin Laden.