It was 3 years ago today…

It was the first day of classes.
Children were dressed in new clothes for the school year.
Mothers were excited to meet the teachers.
Saying hello to your best friends again…

That all changed when a group of armed Chechen separatists and Islamic fundamentalists took more than 1,200 schoolchildren and adults hostage on September 1, 2004, at School Number One (SNO) in the town of Beslan, North Ossetia-Alania.

(Thanks BG for this link to a very powerful video.)

Watching young girls being brought into another room- raped.
Forced to clean up the blood off the floors from the dead children and adults.
So hot you’re forced to strip off your clothes.
Drinking urine to stay alive.
Dragging your younger brother through the halls.
Pulling his limp body through a broken window.
Guns, wires, and bombs. 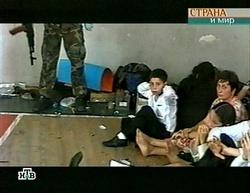 One of the most striking images coming from the Beslan School gymnasium during the early hours after the seige was this shot of a terrified young Beslan boy sitting in the gymnasium where he was being held by the Chechen terrorists. What happened to the boy from Beslan?… The BBC did a follow-up on the boy one year after the tragedy- HERE. When the school blew up, one of the children was blown outside. The child (pictured above) climbed back into the school to be with her teacher. Shortly after that the roof collapsed. Lining up the dead children in Beslan Family and friends of those killed and injured joined former hostages at the charred, crumbling shell of School Number One, a year after the terrorist attack.

They brought flowers and candles to the sports hall where more than 1,300 people were held captive for three days and where armed extremists strung bombs from the basketball hoops.

The gym is now papered with photographs of those who died there – children, teachers and parents and those killed trying to save them. 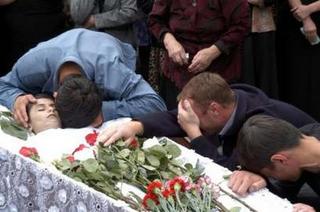 One of the 32 Islamic terrorists was a Saudi.

on the first anniversary at School No. 1’s gymnasium, where more than 1,100 people mostly children endured nearly three days of heat, thirst, hunger and fear, color photographs of the victims hang on bullet-scarred walls alongside faded graffiti begging victims’ forgiveness.

The attack ended Sept. 3 when Russian forces stormed the school after explosions were heard inside. More than half the hostages who died were children. 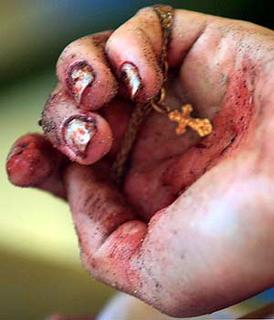 Beslan… Never Again?
Infidels Are Cool has more on this tragedy.