Gates of Vienna earlier reported on a possible torching of the Prophet Muhammad in Denmark this weekend sort of like they do annually in Spain. 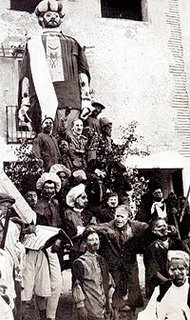 An effigy of Muhammad before the Spaniards torched him like they do each year during one of the “Moors and Christians” celebrations in Spain.

It looks like the rumors were true.
The Danes torched his effigy this weekend— —Video HERE.
Look out- more riots ahead!