The Multi-National Force-Iraq (MNF-Iraq) investigated the Baghdad Hurriya neighborhood on Friday November 24, 2006, after reports that six Sunni civilians were allegedly dragged out of Friday prayers and burned alive in the street. The Iraqi and American forces investigated four Sunni mosques in the mixed neighborhood and did not find any damage to the mosques except for a firebomb thrown at the door of the Al-Nidaa mosque:

At approximately 3:50 p.m., a local civilian reported to the patrol that armed insurgents had set the Al-Nidaa mosque on fire by throwing a gas container into the mosque. The patrol pursued the insurgents but lost contact with them.

The Soldiers called the fire department and set up a cordon around the mosque. Local fire trucks responded to the scene and extinguished the fire at approximately 4:00 p.m. The mosque sustained smoke and fire damage in the entry way but was not destroyed.

Here is a picture of that same mosque from an attack in February of this year. It is quite a beutiful building… 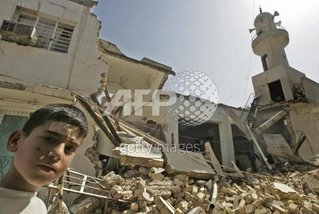 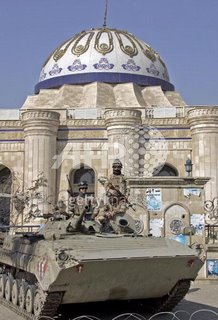 Iraqi soldiers, on top of their armored vehicle, guard al-Nidaa Sunni mosque in Baghdad, 28 February 2006. The Sunni Hurriya mosque was partially destroyed by a bomb attack this morning while four people were killed and 15 wounded in a bomb attack outside a Sunni mosque in eastern Baghdad as the faithful were leaving evening prayers yesterday. (AFP-Getty) 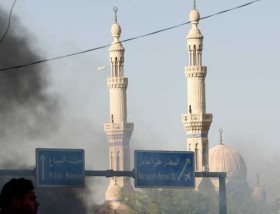 It was reported that 11 people were injured in the attack that happened at the Al Mashahada mosque, which is on the border between Sunni and Shia neighbourhoods, while worshippers were attending evening prayers on September 28 of this year. (Gulf Times)

The AP says that it is sticking by its bogus story despite:

* Witness Capt. Jamil Hussein is not an Iraqi police officer!
* There were not 4 Sunni mosques torched in the attacks in the Hurriya neighborhood but only one mosque was damaged and not destroyed
* Witness Imad al-Din al-Hashemi is described as a University professor, foreign pediatrician, and a Hurriya elder depending on the article
* Witness Imad al-Din al-Hashemi says the mosque he was attending was attacked by “rocket-propelled grenades” yet there is no such damage to the mosque
* No bodies were discovered by Iraqi or Coalition investigators nor were there any pictures as evidence
* The AP later produced anonymous witnesses from the neighborhood
* The Multinational Forces Iraq and Baghdad Police did not find any reports of such an incident occurred after investigating the Hurriya neighborhood
* Multinational Forces Iraq claim that the AP source, Capt. Jamil Hussein, is not who he claims he is. He is not a Baghdad police officer or an MOI employee!
* The imam at the mosque in question where the “6 Sunni torchings” supposedly took place is accused of being a member of Saddam’s secret police by his own congregation!
* Attempts by Sunnis to smuggle arms into this mosque were foiled by Iraqi security forces back in December 2003

The AP says that it has photos from the scene…

Images taken later that day and again this week show a burned mosque and graffiti that says “blood wanted,” similar to that found on the homes of Iraqis driven out of neighborhoods where they are a minority.

…But the Associated Press has not published any of these photos yet from the so-called torchings of 6 Sunnis as far as what I could find. Also, no bodies, no word from the morgue, no evidence, etc…
The AP needs to produce something besides just talk!

Curt at Flopping Aces is still the go-to guy on the story.
And, BizzyBlog has added information to this story and talked with an AP spokesman (not Jamil Hussein).
Hat Tip Larwyn
And, Gina Cobb agrees.

Update: Doug Ross has the interview.