300 youths were arrested after violence broke out at protest in Copenhagen last night. 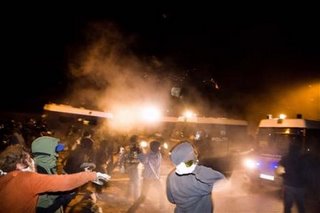 Rocks and fireworks were thrown at police during the clashes that broke out near a youth center:

Danish authorities have released 186 protesters who were detained after a protest against the closure of a youth centre in Copehgagen turned violent.

Around 1,000 people protested on Sunday against court rulings ordering young squatters to leave a city centre building and hand it over to a Christian congregation that bought it five years ago.

Flemming Steen Munch, a Copenhagen police spokesman, said: “They are all Danish citizens.”

Cobblestones and fireworks were thrown at police and at least one demonstrator suffered respiratory problems from the tear gas. Two people, a police officer and a demonstrator, were seriously injured. 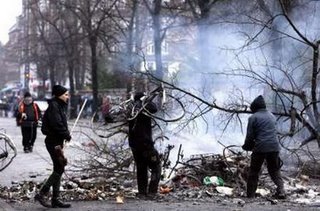 People tidy up a street after riots broke out on the previous night between young protesters and police in Copenhagen, December 17, 2006. (Reuters)