The unhinged American media led their news stories today with this very misleading and pathetic headline:

The Yahoo homepage this morning was just one example: 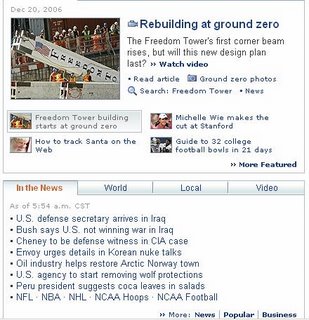 The deranged media headline of the day:
This from Reuters:

WASHINGTON – President Bush, who has contended that the U.S. was winning the war in Iraq, said Tuesday for the first time that American forces were not winning there. He also said the military would be expanded to fight a long-term battle against terrorism.

Bush did not say the U.S. was losing the war, which began in March 2003 and has cost the lives of nearly 3,000 troops. Instead, when asked during an interview with The Washington Post whether the war was being won, the president borrowed the phrasing of the chairman of the Joint Chiefs of Staff, Marine Gen. Peter Pace.

“You know, I think an interesting construct that General Pace uses is, ‘We’re not winning, we’re not losing.’ There’s been some very positive developments. And you take a step back and look at progress in Iraq, you say, well, it’s amazing – constitutional democracy in the heart of the Middle East, which is a remarkable development in itself,” he said.

Again, that is a far cry from the defeatist headline that is making the rounds this morning!
Pathetic!

Jules Crittenden has more on the irrelevant semantic gotcha.

And… The Jawa Report breaks down one of Reuter’s propaganda articles this morning.