Fighting resumed outside of the home of Palestinian Leader Mahmoud Abbas around dawn today. 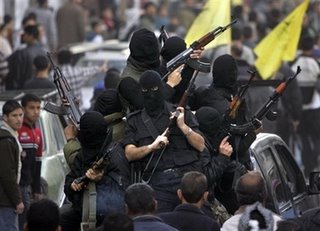 Palestinian gunmen from the Fatah Movement carry their weapons as they march in support of Palestinian President Mahmoud Abbas in the Jebaliya refugee camp, northern Gaza Strip,Sunday, Dec. 17, 2006. (AP)

Let’s see… We can now deduce from the MSM reporting the last 24 hours that “truce” or “ceasefire” in the MSM are code words for “sleep” or “night”.

This was reported late last night at the BBC:

Rival Palestinian factions Hamas and Fatah say they have reached a deal to end violence in the Gaza Strip.

Officials of Hamas, which runs the Palestinian government, said they had agreed a truce with Fatah, loyal to Palestinian leader Mahmoud Abbas.

Fatah officials also spoke of a deal, but there were reports of heavy gunfire continuing into Sunday night.

And, this is from the AP this morning:

The rival factions Hamas and Fatah are fighting for control over the Palestinian government, and the volatile coastal territory was buffeted by violence all day Sunday. Three people were killed in Sunday’s fighting, in which gunmen shot up the Palestinian foreign minister’s convoy and militants launched mortar shells at Abbas’ office.