If you are still wondering…
Why Must Democrats Always Meet With the Wartime Enemy?
…Perhaps you could start with John Kerry.

John Kerry secretly met with representatives from the Vietcong in France while the Vietnam War is raging in southeast Asia in 1970.

Senator John Kerry and Senator Tom Harkin during the Cold War met with the communist radical Daniel Ortega in Nicaragua in 1985. 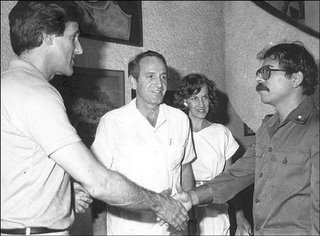 John Kerry (left) and Tom Harkin (middle) both democratic senators with the communist radical Daniel Ortega in Nicaragua, April 1985. The woman is unidentified.

This weekend John Kerry is visiting Egypt, the hostile Syrian Assad Regime and then to “Irak” to see the troops “who are stuck there.”
The Tehran Times (yes, the Tehran Times!)is reporting tonight that Kerry slammed Bush while in Egypt:

Senator John Kerry, visiting Egypt Thursday during a tour of the Middle East, accused the Bush administration of neglecting the Israeli-Palestinian conflict.

Kerry met Egyptian President Hosni Mubarak and said they discussed Iraq as well as the Israeli-Palestinian dispute. “I have always believed that the Middle East peace process is the critical issue of the region, and it has not been focused on for the past 6-7 years adequately,” the Massachusetts Democrat told reporters after meeting Mubarak. “I think there has been a huge loss of opportunities.”

John Kerry is also urging the US to talk with Iran. Maybe this is why a US Gold Star Mom is urging American troops to snub Sen. John Kerry during his visit to Iraq.
We will see.

TigerHawk has more on Kerry’s excursion.