Well, at least the jihadists are happy…
Mike Austin may have the best Iraq Study Group analysis:

A commander-in-chief who refuses to command. A Congress that is unable to govern. A political class that has lost the will to defeat America’s enemies. An entire subset of our own nation that actively works for her defeat. 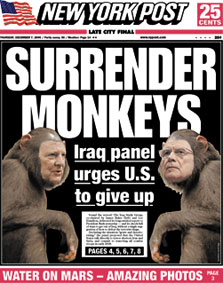 And, to think just 65 years ago today this great nation was attacked at Pearl Harbor.

Now after 5 years of the War on Terror, and 3 years in Iraq with less losses than on one September morning in 2001, the politicians concede Iraq for “peace”…
With Afghanistan next in line to fall.

More… It is interesting that this Group of war experts led by Sandra Day O’Conner and Vernon Jordan, want to pull troops out of Iraq in 2008 when the Multi-National Force Iraq said just yesterday that the Iraqis will be ready to take control of security & combat operations by the end of 2007.

Maybe they can get the troops out of Germany sometime soon?