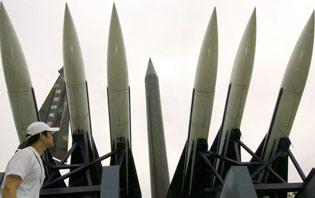 A visitor walks by displays of North Korea’s Scud-B missile (C) and other South Korean missiles at the Korea War Memorial Museum in Seoul. (Scotsman)

Kyodo News reports that Kim jong Il is equipping his soldiers with karaoke machines and keeps track of the karaoke movement in a personal notebook:

(Kyodo) _ North Korean leader Kim Jong Il plans to provide more karaoke machines to the country’s military after finding they help boost morale, according to a recent report in the country’s official newspaper.

The Rodong Sinmun, the newspaper of the Workers Party of Korea, quoted Kim as commenting on the plan in its Dec. 10 edition.

“I plan to send more song-accompanying machines to the People’s Armed Forces,” he was quoted as saying.

According to the report, Kim said during his meeting with military commanders in March that “the atmosphere changed completely” in divisions that were provided with karaoke machines…

The Rodong Sinmun quoted Kim as saying he provides the military with karaoke machines after making calculations based on the number of karaoke machines that have already been sent as well as those that will be sent in the future, which he writes down in his notebook.

One Free Korea today looks at the latest “offensive” against the North Korean refugees.