* Baghdad or Bust! *
Senator John F. Kerry is traveling to Iraq this weekend to meet up with the troops “who are stuck there” for the first time since his “botched joke” act a month ago.

This is how the AP describes the vaudevillian:

Sen. John Kerry, whose botched joke about U.S. troops in Iraq dealt a blow to his presidential ambitions, will travel to Iraq this weekend to meet with soldiers, political leaders and military officials.

“I’ve talked to plenty of guys who’ve come back from Iraq, who are there now, who understand exactly what happened,” Kerry said of his joke in a telephone interview Tuesday with The Associated Press. “They laugh at it.”

Oh, really? Who’s that?
Not this bunch who were interviewed this past weekend… 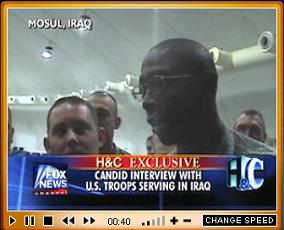 The US troops explained how they felt about John Kerry’s “botched joke” and why they are there serving in Iraq for their country.

This video HERE played on Hannity and Colmes on Monday December 11, 2006, two days ago:

(There is more posted on the Hannity interview HERE)

Hopefully, John Kerry can offer them some “Halp” while he is there visiting.
Ba-da-Bing!