(Do you suppose that it’s too late to enter this in any contest?
This was the best picture Reuters did all year- and you know it wasn’t Photoshopped!)

Is everyone enjoying themselves?… 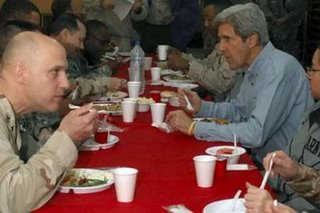 Do you suppose he told any of his good “jokes”?

Please tell me this got YouTubed!
Soldier’s get stuck in a photo-op with Carry. 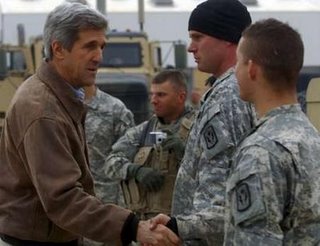 This is how Kerry described his visit with the troops in Basra and Diyala province:

“Today was very informative and very helpful in crystallizing some of my thoughts insofar as what we can negotiate… and what needs to be accomplished,” Kerry told The Associated Press by telephone.

Negotiate? Negotiate with who? Al Qaida? The former Baathists? Iran? Syria?
Thank God this man is not leading our great country today.

“Jon Carry” will not be visiting these Minnesota National Guard troops still deployed on a base in Talil:

The New York Post reports this from one of the guardsmen’s mother:

She said the soldiers see Kerry’s so-called fact-finding trip to Iraq as nothing more than a political ploy to rehabilitate his image in advance of another White House run.

“They’re not real happy that he’s coming over there because they think that it’s basically to get him out of the political hole that he put himself in,” she said.

The Massachusetts Democrat vowed before departing Wednesday on a nine-day trip to Iraq and five other Middle East countries that he would be happy to apologize to any soldiers he encounters in Iraq.

“For anybody who misunderstood [the joke] or got only the White House presentation of it, I’d apologize, obviously,” he told reporters.

That’s pathetic.
You don’t have to be employed by the White House to be insulted by your ” botched joke” HERE, “Jon”.

Jules Crittenden has more on Kerry’s knack at being on the wrong side of history.