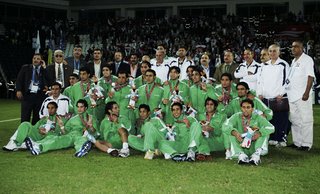 The Iraq team pose with their silver medals after the gold medal match between Qatar and Iraq at the Asian Games. (Asian Games)

Lawk Salih has this good news story from Iraq…
The Iraqi soccer team just did a better job unifying Iraqis than the government has done in three years!

BAGHDAD — Army Lt. Ali Mustafa is ready for tonight. He has two clips loaded with bullets. He hopes to have a chance to empty them.

If Iraq’s soccer team wins its match against Qatar tonight, he’ll join thousands of other Iraqis in celebratory gunfire.

“The formation of our national team is a big blow to terrorism and sectarianism,” says Mustafa, 30, a Shiite. “The power of football can unify all honest people of this country.”

In war-torn Iraq, one force has succeeded in uniting the divided population: soccer.

Iraq’s national soccer team has shocked the sports world by advancing to today’s championship round of the Asian Games, an Olympics-style regional event held every four years.

Iraq will play for the gold medal against Qatar, which is also hosting the tournament. “They have succeeded in unifying us in one competition where the Iraqi government has failed to do so in three years,” said Mohammed Abdel-Ilah, 30, a security guard and champion swimmer who competed in the 2000 Sydney Olympic Games. 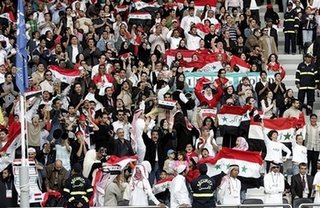 Also today…
Newsweek is shocked, shocked, to find that the Iraqi economy is booming. The people at Newsweek obviously aren’t Lawk Salih fans.