At the White House yesterday, Iraqi Shiite leader Abdel Aziz Hakim lashed out at the media for bogus reporting… 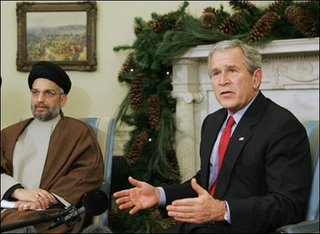 This didn’t make the headlines… But, Iraqi Shiite Leader Abdul-Aziz Al-Hakim had strong words for the defamers yesterday.

President Bush Meets with His Eminence Abdul-Aziz Al-Hakim, Leader of the Supreme Council for the Islamic Revolution in Iraq
The White House:

The Iraqi situation has been subjected to a great deal of defamation, and the true picture is not being presented in order to show a dark side of what’s happening in Iraq.
(See Here, Here, and Here, for starters)

We see the attempts to defame and distort the situation in Iraq not taking into consideration the democratic steps that that country has taken, writing the constitution and establishing a state that depends heavily on the constitution, that it is unified and that it is strong. There are attempts to show the sectarian strife in an attempt to weaken the position in Iraq. (See AP)

Therefore, we believe that the Iraqi issue should be solved by the Iraqis with the help of friends everywhere. But we reject any attempts to have a regional or international role in solving the Iraqi issue. We cannot bypass the political process. Iraq should be in a position to solve Iraqi problems. We welcome any effort that could enhance the democratic reality in Iraq and protect the constitutional role of that state.

We have gone a long way to establish a democratic and pluralistic society in Iraq. We have given a great deal of sacrifice to achieving the objective. We cherish all the sacrifices that took place for the liberation and the freedom of Iraq, sacrifices by the Iraqi people, as well as friendly nations, and on top of that list, sacrifices by the Americans.

Meanwhile, across the way… 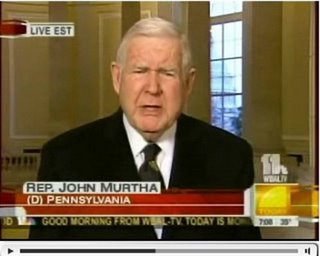 Jack Murtha repeats the jihadists that “America is the problem.”
HotAir has this video.

The media whined that this was unfair.

The AP still has not produced an iota of proof that its Six Sunni story was not just plain old terrorist propaganda.

Mark Tapscott calls this the AP’s “60 Minutes Moment”,
Via Instapundit.

** AP Update: I heard back from Lt. Dean on this latest AP story and the questions that surround it. He is still looking into the matter and says he will get back to me.