On Friday the Iraqi Red Crescent Society claimed that US soldiers were the biggest threat to their security. On Sunday, insurgents kidnapped 30 people from its offices in the Iraqi capital. 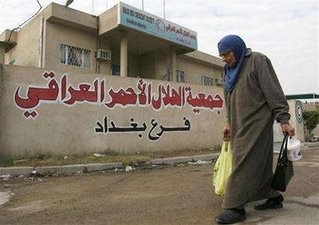 A woman walks past the Red Crescent headquarters where dozens of people were kidnapped on Sunday in Baghdad December 18, 2006. (REUTERS/Namir Noor-Eldeen)

The BBC is reporting on the Red Crescent kidnappings in Baghdad today:

The Iraqi Red Crescent has suspended its operations in Baghdad a day after almost 30 people were seized from its offices in the Iraqi capital.
A Red Crescent official said the kidnappers had released 13 people.

The International Committee of the Red Cross (ICRC) has called for the others to be freed, saying the ]Red Crescent provided vital help for those in need.

The ICRC pulled its own international staff out of Iraq three years, ago when its offices there were bombed.

Jamal may want to rethink that.