Radical Islamic Cleric Abu Bakar Bashir (Abu Bakar Ba’asyir) was cleared by an Indonesian court for involvement in the Bali bombings this week. 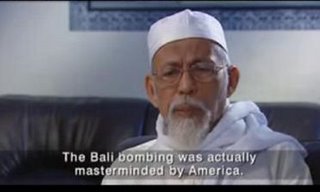 This latest ruling effectively clears the radical cleric for being part of the evil conspiracy behind the Bali blasts that killed 202 people.
The BBC reports:

Ba’asyir was first arrested shortly after the Bali nightclub bombings in October 2002, although he was never accused of actually taking part in the attack.

The two bombs ripped through the Kuta area of Bali, a regular haunt for tourists, destroying a nightclub and killing mainly foreigners.

Ba’asyir was held in custody and faced two separate trials, eventually serving two separate sentences, the first for minor immigration offences, the second for being part of what the court called an “evil conspiracy”.

In both cases more serious charges were either dropped or later overturned on appeal.

Now the conspiracy charges have also been dropped, as a result of an appeal filed during Ba’asyir’s imprisonment. 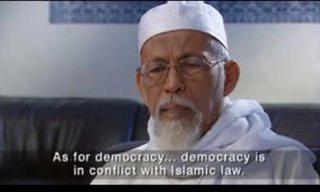 Abu Bakar believes that sharia will be imposed when Muslims become the majority in Australia.
Here’s the description about the YouTubed interview with Abu Bakar Bashir:

In this interview with Jakarta-based correspondent Geoff Thompson, the Indonesian Muslim cleric Abu Bakar Bashir argues that the convicted Bali bombers should not be executed because although they planned the nightclub bombing, the operation was “hijacked” by CIA agents who planted a “micro-nuclear bomb.”

Bashir blatantly peddles these internet conspiracy theories and teaches a fundamentalist Islamic creed at his religious school at Solo in central Java.

The vision of Indonesia promoted by Bashir is one of radical change where democracy would be subverted to “Allahocracy” and sharia law imposed.

On October 12, 2002 in the tourist district of Kuta on the Indonesian island of Bali, Islamic radicals killed 202 people, 164 of whom were foreign nationals. The attack was the deadliest act of terrorism in the history of Indonesia.