Hezbollah’s second in command led chants of “Death to the US and Israel” at today’s massive Pro-Hezbollah rally in Beirut!

Could someone please explain why a massive throng of people chanting “Death to America” does not make headlines in this country?

A general view of protesters at a mass rally in central Beirut called by the Hezbollah-led opposition to step up their 10-day campaign to topple Lebanon’s Western-backed government December 10, 2006. (REUTERS/Sharif Karim)

Leading protesters in a chant of “death to the US and Israel,” Sheikh Naim Qassem said: “I tell those who are hiding in their castles: ‘Open your eyes and ears to this scene; enough searching for international support. By God, neither the support of the US nor the Western countries and some Arab countries will help you. This crowd and public want its country back.'”

The demonstration was “purely political and peaceful,

not sectarian nor violent,” Qassem said. “It is a public move in the face of a failed and unconstitutional government.”

The BBC has video from the massive protest. 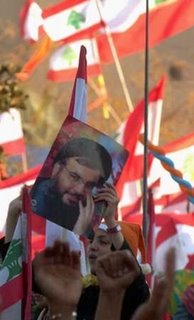 The Lebanese Sunni spiritual leaders say that toppling the Siniora government would be crossing a “red line” and that it will never be allowed!

Rumors have it that Hezbollah leader Nasrallah may have accepted an Arab peace plan for Lebanon. We will see.

Pajamas Media has a roundup of news surrounding today’s protest.