This is definitely not your typical tent city!

Just thugs in a tent.

Hezbollah thugs are now blocking the roads to government offices where the Lebanese leaders are holed up. The thugs promise to stay put until the government falls. 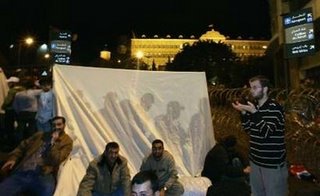 A Lebanese pro-Syrian protester (R) prays as demonstrators encircle the government headquarters in Beirut December 1, 2006. Lebanon’s opposition plans to block off all roads leading to the government offices on Friday where Prime Minister Fouad Siniora and most of his ministers are holed up, a senior opposition source said. (REUTERS/Eric Gaillard)

You may have noticed the absence of Hezbollah flags at the protest on Friday…
The BBC shows what happened to one protester who went against the pre-planned protest rules and started waving a yellow Hezbollah flag… He was whisked away by Hezbollah marshals!
VIDEO HERE

Mary Katherine Ham reported this on the latest developments at the Hezbollah tent city, via The Australian:

After darkness fell, protesters blocked access roads to Mr Siniora’s office where he was holed up inside. They put up tents on at least three main roads leading to the government building.

“We are inside, a group of ministers and the prime minister,” a government official said. He declined to say which ministers were there and did not give any further details except to say their families were not with them.

The road blocks may be the start of Hezbollah’s coup d’etat. 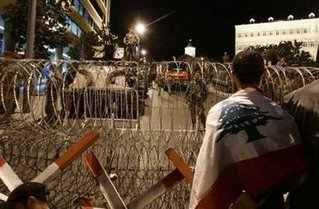 A Lebanese pro-Syrian protester looks at soldiers as demonstrators encircle the government headquarters in Beirut December 1, 2006. Lebanon’s opposition plans to block off all roads leading to the government offices on Friday where Prime Minister Fouad Siniora and most of his ministers are holed up, a senior opposition source said. (REUTERS/Eric Gaillard)

“Organizers set up a chain of tents and makeshift toilets to accommodate the protestors… The sit-in would be called off “only when this government resigns and a national unity government is formed.” 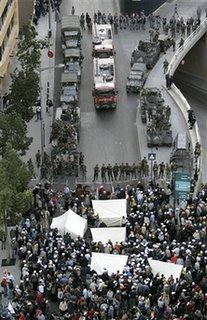 Lebanese soldiers stand guard in front the government house, as Hezbollah supporters set up tents that were erected on a road outside Fuad Saniora’s office. (AP)

So much for peaceful protesting!
Ya Libnan reports on Saturday:

Hezbollah protestors, vowing to topple the cabinet, besieged government headquarters in downtown Beirut, holding up Prime Minister Fouad Saniora and several other ministers inside. However Saniora, vowing not to “allow any coup against our democratic regime,” stood rock-solid Friday to the blockade, which eventually eased following a flurry of diplomatic activity.

Lawhawk has more on Camp Hezbollah. 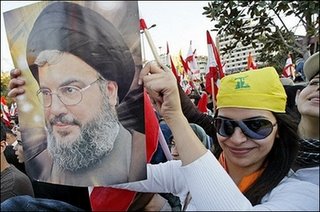 A demonstrator holds a picture of Hezbollah leader Hassan Nasrallah during a protest in downtown Beirut. Hundreds of thousands of opposition protesters, led by the pro-Syrian militant group Hezbollah, staged a massive show of force in Beirut aimed at pressing the Western-backed government to resign.(AFP/Ramzi Haidar)