There is still a cancer in Lebanon…
Hezbollah does the bidding of Syria today. The terror group says today’s protest is against the “corrupt” government… But in reality, it is only because the Lebanese government is making Syria nervous. The Syrians are afraid the Hariri assassination investigation is getting too close to home and they were never happy about being asked to leave their proxy state.

From Beirut to the Beltway:

When Israel launched its retaliatory war in Lebanon this summer, some in Lebanon shouted: “We are all Hizbullah.” …On Friday, Syria and Iran will launch an attack on Lebanon.

Nasrallah must have told his followers to leave their yellow Hezbollah flags at home… But that didn’t stop his followers from jazzing up the Lebanese flag.
Where’s the yellow flags? 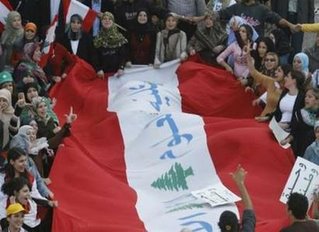 Controversial and Christian leader Michael Aoun addressed the crowd during the demonstration where the protesters have set up camp outside of Fouad Siniora’s offices:

Retired General Michel Aoun, leader of the predominantly Christian Free Patriotic Movement, addressed the crowd from behind a bullet-proof glass shield saying: “I call on the premier and his ministers to resign. We want another Sunni to replace Siniora”.

Aoun told the cheering crowd: “Resignation is the only way out”.

He criticized some media reports that said participation in the protest by Christians, Sunnis and Druze Muslims was marginal.

Aoun, addressing media organizations, said: “Shame on you to differentiate one sect from another… we’ve gathered under the Lebanese flag”. 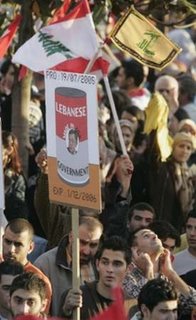 A Lebanese Hezbollah supporter carries a placard as he protests against Lebanon’s Prime Minister Fouad Siniora during a rally in Beirut December 1, 2006. A sea of flag-waving protesters demanded on Friday the resignation of Lebanon’s Western-backed government at a Hezbollah-led rally, but Siniora appeared unmoved by the pressure. (REUTERS/Mohamed Azakir)

Does anyone else notice how the media always describes the government as either “Western-backed” or “US-supported” even though it was democratically elected?

Lebanon’s Mufti Mohammad Rachid Kabbani, a Sunni, spoke out against the protest:

In a show of solidarity with the cabinet, the Sunni Mufti today led prayers in the government building (Serail). The Shia mufti, Ali al-Amin, said the protest served the political interests of its organizers and not the people or the country. 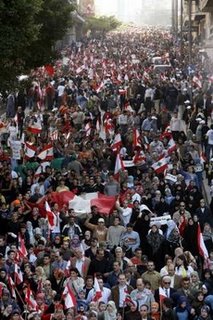 Lebanese people carry national flags as they arrive in Beirut to attend a rally held by pro-Syrian groups December 1, 2006. Tens of thousands of flags-waving Lebanese poured into central Beirut on Friday for a Hezbollah-led protest aimed at bringing down the Western-backed government,which has vowed it will not yield to the pressure. (REUTERS/Jamal Saidi)

This is an appropriate display, since there have been 5 Anti-Syrian officials assassinated in Lebanon in the last year and a half. 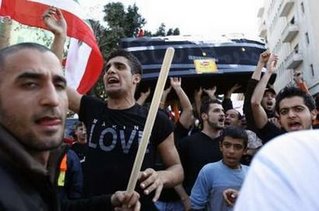 Lebanon’s Hezbollah supporters carry a coffin that reads ‘Corrupt government ‘ as they chant slogans in a rally held by pro-Syrian groups December 1, 2006. (Reuters)

Nasrallah sitings but not in person… 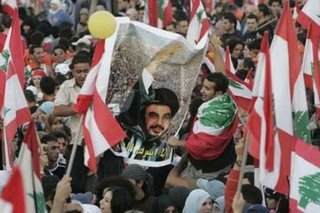 A Lebanese man holds a poster of Hezbollah leader Sayyed Hassan Nasrallah during a rally in Beirut December 1, 2006. (Hezbollah)

Michelle Malkin has a roundup with links.
Notice the Israel-bashing comments at USA Today’s On Deadline protest post.
Abu Kais at Michael J. Totten has much more on the developments.
Snapped Shot has questions.
AllahPundit has a terrific roundup on the Hezbollah plan.
Vital Perspective has the speech by Nasrallah.
Via Charles Johnson
Mary Katherine Ham explains Hezbollah’s preplanning. 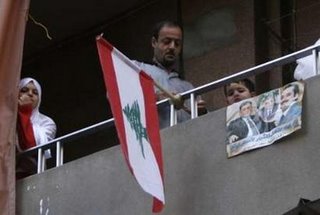 A pro-government man attaches a Lebanese flag to his balcony in Beirut December 1, 2006. Prime Minister Fouad Siniora called on Lebanese to Raise national flags in front their homes on Friday. (REUTERS/Jamal Saidi)