In clear violation to the Geneva Conventions…
One person was killed and 11 were wounded when fighting broke out inside Gaza’s main hospital today. 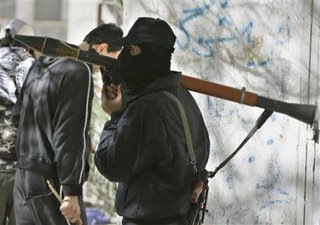 ADN Kronos reports that a Hamas member was killed when fighting broke out inside a Gaza hospital on Tuesday:

According to London-based Arabic daily al-Sharq al-Awsat, a death sentence was issued against seven leading Fatah members, including Muhammad Dahlan, a powerful Fatah member of parliament and a former security chief in Gaza in retaliation for an assassination attempt on Hamas prime minister, Ismail Haniya.

Dahlan has rejected allegations he was behind the murder attempt Friday on the premier.

Palestinian in-fighting – the worst in a decade – escalated after the president called on Saturday for early elections sparking allegations by Hamas that he was attempting a ‘coup’.

Reports on Tuesday said a Hamas policeman was killed in the gun fight at Shifa Hospital in Gaza City.

The attack reportedly targeted a Hamas position inside the building.

A Hamas spokesman confirmed that a member of the Hamas executive force, which was set up six months ago and is controlled by the interior minister – was killed and several others injured.

Meanwhile, at the university… 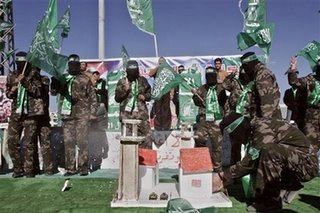