Hamas and Fatah agreed to a peace deal on Sunday afternoon but heavy gunfire continued into the night in Gaza. 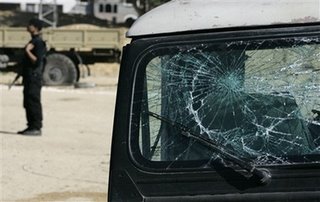 A damaged vehicle of Palestinian president Mahmoud Abbas’ Presidential Guard is seen at a training camp that was attacked by gunmen, in Gaza City, Sunday, Dec. 17, 2006. Gunmen attacked the convoy of the Hamas foreign minister and raided a training base of security forces allied with President Mahmoud Abbas in escalating factional fighting Sunday, a day after the Palestinian leader announced he would end nine months of Hamas rule by calling early elections. (AP Photo/Hatem Moussa)

Palestinian rivals Hamas and Fatah reached a deal on Sunday to stop fighting after a day of bloodshed in which President Mahmoud Abbas’s offices came under mortar fire and his forces took over two ministries, Hamas said.

Hamas official Ismail Rudwan told Reuters the groups had agreed to resume talks on forming a unity government, halt armed displays, return security forces to their headquarters, release men abducted by each side and end a siege of government ministries.

Fatah leaders were not immediately available to comment and gunfire could still be heard near Abbas’s offices in Gaza City, witnesses said. 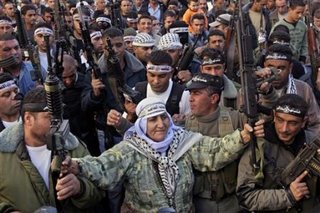 A Palestinian woman holds two rifles as militants of the Al-Aqsa Martyrs Brigades arrive at a rally supporting Palestinian President Mahmoud Abbas and the Fatah movement, in the West Bank town of Jenin, Sunday, Dec. 17, 2006. (Yahoo)

Also today Hamas fired on the Abbas office compounds in Gaza and a senior Fatah official was found dead after being kidnapped:

Gunmen fired mortar bombs at Palestinian President Mahmoud Abbas’s office in Gaza on Sunday after Abbas forces took over two ministries run by the ruling Hamas movement, which has dismissed his call for new elections.

Foreign Minister Mahmoud al-Zahar, a senior Hamas leader, accused Abbas’s security men of attempting a “military coup” by overrunning the ministries. He demanded they leave or else be arrested, a move that could provoke further violence.

Forces loyal to Hamas and Abbas’s Fatah fought street and rooftop gunbattles across Gaza through the day. A senior paramilitary commander loyal to Abbas was found dead after being abducted. Residents said it was the heaviest bout of internal fighting in living memory.

The mounting unrest followed Abbas’s call on Saturday for fresh presidential and parliamentary elections, a dramatic move that sought to lift crippling Western sanctions imposed on the 9-month-old Hamas government.

J. F. Beck notes the Hamas response to the accusations that it was behhind the attack (via Tim Blair):

Abu Ubaida, a spokesman for Hamas’s armed wing, denied the group had been involved in the attack, the first of its kind against the U.S.-backed 3,500-strong force, telling Reuters: “This is a wrong and irresponsible accusation.”

Palestinian Foreign Minister Mahmud Zahar, of Hamas, siad that gunmen fired on his convoy near his office in the Gaza Strip.(AFP/File/Louai Beshara)

Dan Riehl is following the story.
Rantburg has more on today’s Gaza violence.