“Most of the south of Iraq is a good example of what Iraqis working together can do. This is very similar the Baghdad I grew up in the 60s and 70s.” 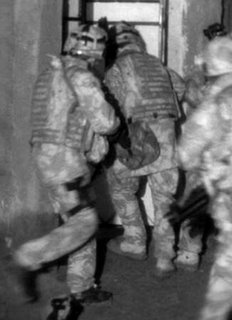 British soldiers await the word to launch a strike as part of Operation Pisa in Basra City December 8, 2006. British and Danish troops backed by tanks seized five suspects accused of attacks on coalition forces in Iraq on Friday in the largest operation of its kind since the U.S. invasion, the British military said. (REUTERS)

The following is Iraqi-American Haider Ajina’s translation of a headline and article, which appeared in Iraq’s Buratha News agency December 7, 2006:

Major General Ali Hamadi chairman of the tri-security agencies in Basra said today that the security situation in Basra has improved and is consistently improving. Operation Sinbad, for security and reconstruction, has achieved important results.

Hamadi added in a press conference he held today at Basra police head quarters, “Operation Sinbad has bore important fruit, for example the arrest of 1502 suspects, we were able to replace the British units in the tenth and eleventh phase of the operation. This will shrink the role of the British forces to that of support only. The worst that the residences of Basra have suffered was a few Katyosha rockets fired on a few homes. We have placed plans to combat this bad situation.”

Operation Sinbad for security and reconstruction was launched three months ago. It is a joint operation between Iraqi and British forces. It involves search and seizure operations as well as reconstruction of schools and clinics.

While Baghdad mulls over the Baker commission report, Basra, Iraq’s second largest city, is moving on with its three month old Operation Sinbad, and methodically executing its eighteen phases.

It appears from last week’s news that Basra is calming down and has minimal sectarian strife. The Sadamists and Alqaida have not been able to create in Basra the strife they are creating in Baghdad. The three main Sunni groups have broken rank with their Ramadi and Baghdad colleagues and are joining with their Shiite brethren to keep Basra secure. The Basra Sunni leaders were the first to condemn attacks on Shiite shrines and Shiites, and they are continually calling for the stopping the spilling of Iraqi blood. These calls appear to be listened to in Basra. Most of the south of Iraq is a good example of what Iraqis working together can do. This is very similar the Baghdad I grew up in the 60s and 70s.

Iraqi Prime minister Alamliki has promised to expand his government to include more groups and has called for a meeting of all Iraqi political, sectarian and religious leaders to take place no late than the end of this month. The meeting will be held to come to an agreement, which will, hopefully, stop or seriously decrease the spilling of Iraq blood.

And, here is another Basra update from Haider Ajina:
The following is a translation of a headline and article, which appeared in Iraq’s “Al-Sabah” and “Aswat Al-Iraq” on November 30th:

Sunni leaders in Basra representing, Party of Islam, Muslim Scholars Association, The Sunni Endowment and heads of Sunni tribes, issued a Fatwa (religious opinion or edict) banning and forbidding the spilling of Shiite blood or joining any terrorist or extremist organization. The Fatwa also called for the rebuilding of the Asqariah shrine in Samarah.

Sheik Abd Al-Karim Jerad (Sunni), head of the “Party of Islam”, said, in a press release on Wednesday, “All Sunni religious references in Basra had a conference on Tuesday and issued a unanimous Fatwa (religious opinion) forbidding and banning the spilling of all Iraqi blood (Sunni or Shiite) and all other sects.” He pointed out that this Fatwa reinforces ones from the past issue by these same groups. He added, “The Fatwa also forbad and banned joining any extremist or terrorist groups, for they are the source of the rancor. The Fatwa also stipulated the speeding up of rebuilding the Asqariah shrines in Samara. We are calling for the unity of citizens legally and nationally. I call on the Basra security forces to fulfill full security, pursue criminals, extremists and terrorists.” He added that Multi National forces should leave in accordance to a timetable and give the country full independence. Jerad then said, “While this Fatwa came in response and solidarity with Muqtada Alsadar’s request, it also came to reinforce earlier Fatwas issued by these same groups.”

Muqtada Alsadar had asked, in his Friday sermon, Sheik Hareth Althari (chairman of the Muslim Scholars) to denounce the spilling of Shiite blood and stand against extremist organizations. This brought about the Fatwa, which was signed by nine Sunni scholars.

Basra (Iraq’s second largest city) being much more peaceful than Baghdad, is taking the lead in uniting Shiite and Sunni against the terrorists who are trying to tear them apart. Sadly, though a high-ranking member of the “Sunni Endowment” was assassinate late Thursday with two of his guards. This is the price courageous people pay in Iraq if they denounce sectarianism and extremism. The extremist or “Baath–Alqaida” alliance will go after courageous leaders such as these. The reasons for this are obvious, they want the instability to continue, democracy and the rule of law to fail and wait us out.

This is the second time in as many days that Sunnis in Basra are showing solidarity with their Shiite brethren and distancing themselves from the Baathists and Alqaida and its extremist ilk. I hope other provinces will join this trend.