** Violence Escalates in Palestinian Territories! **
Fears of Civil War as clashes break out in Gaza and West Bank!! 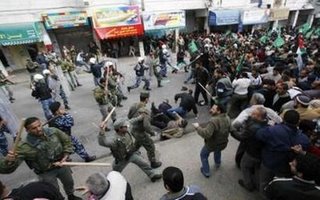 Members of the Palestinian security forces clash with Hamas supporters in the West Bank city of Ramallah December 15, 2006. (Reuters)

This does not look good! 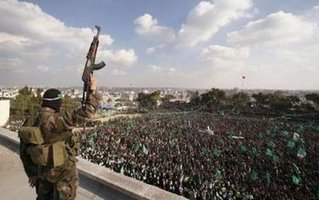 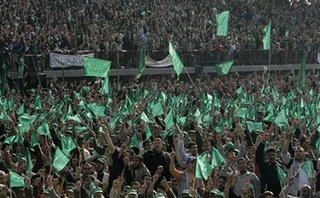 Hamas supporters wave flags as they gather for a speech by Palestinian Prime Minister Ismail Haniyeh from Hamas, not seen, in Gaza City, Friday, Dec. 15, 2006. Leaders of both Hamas and the rival Fatah group warned in recent days that the spiraling violence threatened to bring the Palestinians to civil war and the fighting Friday came a day after gunmen shot at the entourage of Haniyeh in an attack the group said was orchestrated by a powerful Fatah leader. (AP Photo/Hatem Moussa)

The BBC has the latest developments in Gaza after the attempted assassination of Hamas Prime Minister by suspected Fatah militants on Thursday night:

Hamas accused Fatah’s Mohammad Dahlan (Left) of organising an attack on Mr Haniya as he crossed into Gaza from Egypt.

Hospitals in the West Bank town of Ramallah said 32 people were injured in clashes there. Fighting was also reported in Gaza City.

The clashes come as Hamas marks the 19th anniversary of its founding.

Hamas gunmen patrolled the streets of the city as the group put on a show of strength following Thursday’s attack on Mr Haniya.

“We tell all those who believe in the logic of assassination that this does not scare even little children in Hamas,” he told the crowds.

“We did not join this movement to become ministers but rather to become martyrs.”

One bodyguard was killed and Mr Haniya’s son was among five injured in the gun battle at the Rafah border crossing. 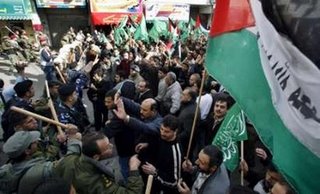 Palestinian Hamas supporters confront with members of the security forces during a Hamas rally in the West Bank city of Ramallah December 15, 2006. (Reuters)

Brian Lebdetter has more shots of the violence.