Jimmah, Jimmah, Jimmah.
…Certainly you know that using “(another’s production) without crediting the source” is plagiarism? 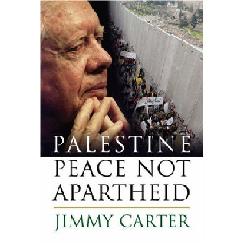 The maps in question appear on Page 148 of Carter’s book
The Political Pit Bull reports:

While the LAT wasn’t able to get a hold of Ross last night, luckily FOX News was able to get him this morning. And in what seems to be an open and shut case of plagiarism, Ross explains that the maps in Carter’s book were specifically created for his book “The Missing Peace”–and Ross created them himself.

Here is one map from “Missing Peace” that shows the extensive work done previously by Dennis Ross. 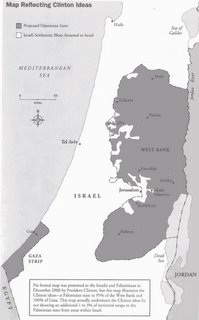 Map from The Missing Peace via Jewish Virtual Library.

This is the Dennis Ross map in question: 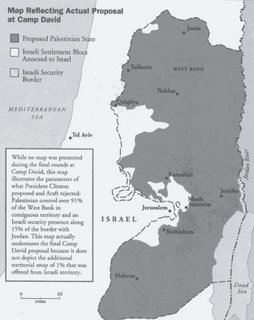 This was picked up at Jewish Virtual Library in a review of the book by Jimmy. Look under section “Camp David 2000”.

Updates to Ross’s maps can be found HERE and HERE. Other Dennis Ross maps from The Missing Peace are listed HERE.

Here is what Dennis Ross said to FOX News this morning with Brian Ross:

Dennis Ross: The maps in his book certainly appear to be taken from my book. Those maps are maps that I created, that didn’t exist. The fact is that when we did the Clinton idea, when we did Camp David, we presented ideas, percentages, criteria,. After the fact, I created maps based on that and he has used maps that are drawn from my book without my permission.

Political Pit Bull has the video!

Here is Carter’s response yesterday to the accusations of lies and distortions in the LA Times (Via FOX):

For the last 30 years, I have witnessed and experienced the severe restraints on any free and balanced discussion of the facts. This reluctance to criticize any policies of the Israeli government is because of the extraordinary lobbying efforts of the American-Israel Political Action Committee and the absence of any significant contrary voices…

With some degree of reluctance and some uncertainty about the reception my book would receive, I used maps, text and documents to describe the situation accurately and to analyze the only possible path to peace: Israelis and Palestinians living side by side within their own internationally recognized boundaries.

…I’ve signed books in five stores, with more than 1,000 buyers at each site. I’ve had one negative remark — that I should be tried for treason — and one caller on C-SPAN said that I was an anti-Semite…

The book describes the abominable oppression and persecution in the occupied Palestinian territories, with a rigid system of required passes and strict segregation between Palestine’s citizens and Jewish settlers in the West Bank. An enormous imprisonment wall is now under construction, snaking through what is left of Palestine to encompass more and more land for Israeli settlers. In many ways, this is more oppressive than what blacks lived under in South Africa during apartheid. I have made it clear that the motivation is not racism but the desire of a minority of Israelis to confiscate and colonize choice sites in Palestine, and then to forcefully suppress any objections from the displaced citizens.

This may have sounded good yesterday, but face it Jimmy, you’re Busted! 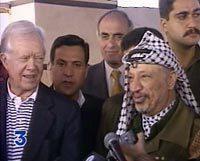 FOX News has more on the video posted on their website now:

WASHINGTON — Former President Jimmy Carter faced new criticism Friday over his controversial book on Palestinian lands when a former Middle East diplomat accused him of improperly publishing maps that did not belong to him.

The new charge came as Carter attempted to counter charges from a former top aide that the book manipulates facts to distort history.

“I think there should be a correction and an attribution,” Ross said. “These were maps that never existed, I created them.”

After Ross saw the maps in Carter’s book, he told his publisher he wanted a correction.

When asked if the former president ripped him off, Ross replied: “it sure looks that way.”

Dr. Kenneth W. Stein resigned yesterday from the Carter Center.
Here is his letter of resignation obtained by FOX News.

National Review’s Media Blog has the side-by-side comparisons up.