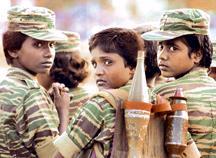 Less than a month ago, a liberal judge appointed by Bill Clinton struck down a ruling that allowed the president to designate groups as terrorist organizations, saying Bush’s post-Sept. 11 executive order was unconstitutionally vague.

The ruling was decided on November 28, 2006, not even one month ago, and took two terror groups off the list as designated terror organizations:

The Humanitarian Law Project had challenged Bush’s order, which blocked all the assets of groups or individuals he named as “specially designated global terrorists” after the 2001 terrorist attacks.

“This law gave the president unfettered authority to create blacklists,” said David Cole, a lawyer for the Washington, D.C.-based Center for Constitutional Rights that represented the group. “It was reminiscent of the McCarthy era.”

The case centered on two groups, the Liberation Tigers, which seeks a separate homeland for the Tamil people in Sri Lanka, and Partiya Karkeran Kurdistan, a political organization representing the interests of Kurds in Turkey.

U.S. District Judge Audrey Collins enjoined the government from blocking the assets of the two groups.

Both groups consider the Nov. 21 ruling a victory; both had been designated by the United States as foreign terrorist organizations.

Today, one of those “newly approved” terror groups, The Tamil Tigers, admitted to kidnapping 21 children for use as soldiers:

Tamil Tiger rebels in Sri Lanka have admitted kidnapping at least 21 students in the east of the country.

A rebel spokesman told the BBC that junior Tiger fighters had made a “serious mistake” in taking the children from their school.

Brig Samarasinghe said 21 girls and three boys, all teenagers, were preparing for a school examination when they were picked up by the rebels on Monday evening.

“The incident was reported to the local police. The police have informed the peace monitors and the human rights commission,” he said.

Brig Samarasinghe said the children could have been taken away for “forced conscription”.

Correspondents say that in the past the Tigers have always denied abducting children to use as soldiers.

Update: Oops! Tigers release the children; say it was a mistake.