(This post has been bumped up)
** Update: Centcom responds and is looking into this latest “questionable” source used by the Associated Press in their report yesterday on the car bombings at the Iraqi market. This AP writer reported that Lt. Ali Muhsin reported that 91 were killed in the blasts. Later reports put the total somewhere around 50.

Sir:
We have requested our contact in the Coalition Police Assistance Training Team to get back to us. The length of time this takes seems to vary from week to week. I know the MOI is moving locations this week so I am not optimistic.

This list of questionable media sources from Iraq was released earlier in the week by the Multi National Force Iraq as reported by Michelle Malkin and Flopping Aces. Here is that list:

Finally, notice no mention from AP of the long list of problematic Iraqi Police/Ministry of Interior spokesmen quoted by the AP and others that the military says it cannot verify as legitimate employees of the IP/MOI published at Flopping Aces: 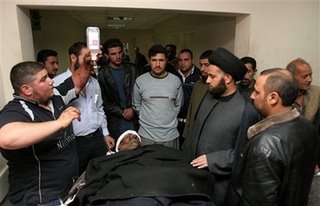 An Iraqi man injured in an explosion is treated at a hospital in Baghdad, Iraq, Saturday, Dec. 2, 2006. A triple car bombing struck a food market in a predominantly Shiite area in central Baghdad on Saturday, killing at least 51 people a day after a U.S.-Iraqi raid against Sunni insurgents in a nearby neighborhood. (AP Photo/Karim Kadim)

Now… In the news today from Iraq AP writer QAIS AL-BASHIR writes this:

The bombs were about 100 yards apart and exploded nearly simultaneously at about 4:30 p.m., said police Lt. Ali Muhsin and hospital officials.

Most of the victims were in the busy al-Sadriyah shopping district in central Baghdad, Muhsin said. At least 10 other parked vehicles were destroyed in an area where street vendors sell fruit, vegetables and other items such as soap.

Muhsin and hospital officials said 91 people were killed and 43 were wounded, raising the death toll from 38 after many of the victims died of their wounds.

Yep… You got that right!
It is another AP article quoting from a questionable news source- Lt. Ali Muhsin.
Hat Tip reader TechTweaker

I have an email off to a Centcom contact. I am hoping to get something back on whether the MNF-Iraq have taken Lt. Muhsin off their questionable list. This will determine whether the AP is going to continue to report propaganda or news.

** I will post something as soon as I hear anything.

The AP said in response to the embarrassing find this past week that their Six Sunni story was bogus that they were satisfied with their reporting and would continue to report the news/terror propaganda as they d*mn well please. Thank you.
It looks like they weren’t kidding.

Curt at Flopping Aces says that it is getting worse.

Update: Jules Crittenden has this to say about this whole AP fruckas at the Boston Herald:

The AP, of course, has been delivering unbalanced reports about U.S. national politics for some time, as when President Bush, whom AP reporters despise, is barely allowed to state his case on an issue before his critics are given twice as much space to pummel him. The AP, once a just-the-facts news delivery service, has lost its rudder. It has become a partisan, anti-American news agency that seeks to undercut a wartime president and American soldiers in the field. It is providing fraudulent, shoddy goods. It doesn’t even recognize it has a problem.

There’s more. It is very good.

Charles Johnson has more on a recent Media Bias Study.