Clashes broke in Tarik Jdideh on Sunday after Hezbollah protesters infiltrated the Sunni neighborhood. The Hezbollah members carried stones, sticks and knives with them for fight that lasted about 45 minutes. Shots were fired and one Hezbollah member, 20 year old Ahmed Ali Mahmoud, lay dead.
ADKronos reported:

On Sunday Ahmed Ali Mahmoud, a 20-year-old Shiite Muslim, was shot during a clash between Shiite and Sunni Muslims in Beirut’s predominantly Sunni Tarik Jdideh neighborhood. It was not clear where the gunfire came from, officials who spoke on condition of anonymity said. The gunfire was directed at pro-Hezbollah Shiite protesters. 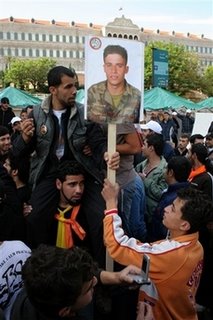 Lebanese supporters of Hezbollah and their allies hold the photo of Ahmed Ali Mahmoud who was killed during clashes which erupted between groups of Shiites and Sunnis, in front of the Government House, seen in the background, in Beirut, Lebanon, Monday Dec. 4, 2006. (AP)

Abu Kais at From Beirut to the Beltway has more thoughts on the “skirmish”:

The Hizbullah supporter that was shot dead on Sunday may or may not have been shot by the Sunni residents of Qasqas. The area is infested with pro-Assad Ahbash Islamists, and I would not put it past one of them or some Syrian intelligence operative to have pulled the trigger—similar to what happened during the airport road riots when a young man was shot in the back by a mysterious bullet to turn people against the pro-government Internal Security Forces (ISF). In fact, and following the clashes, security forces arrested three Syrians who were throwing rocks from the roof of a building overlooking the area. 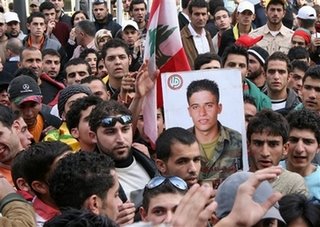 Lebanese supporters of Hezbollah and their allies hold the photo of Ahmed Ali Mahmoud who was killed during clashes which erupted between groups of Shiites and Sunnis, in downtown Beirut, Lebanon, Monday Dec. 4, 2006. Violent clashes broke out between Shiite and Sunni Muslims in the capital, leaving one man dead from gunshot wounds and 21 others injured at a time when tensions throughout Lebanon threaten the country’s fragile sectarian and political balance. Tension has been running high in Lebanon, particularly since Friday when Hezbollah supporters began an open-ended sit-in in Beirut in an effort to bring down the government of Prime Minister Fuad Saniora. (AP Photo)

The Lebanese officials later prevented Hezbollah from stirring up more trouble in the Sunni neighborhood:

The army threw a security dragnet in Tarik Jedideh in an effort to prevent followers of the pro-Syrian Hezbollah and Amal movement from stirring trouble in the Sunni neighborhood. 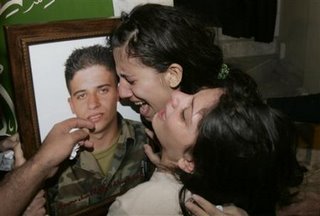 The sister, and fiancee of Ahmed Ali Mahmoud who was killed during clashes which erupted between groups of Shiites and Sunnis, mourn next to his portrait, in Beirut, Lebanon, Monday Dec. 4, 2006. (Yahoo)