Mr. “I can’t look you in the eye… But, I’ll gaze at you like glazed chicken prancing half-naked around a stage” get’s busted!

Mahmoud Ahmadinejad gets busted for watching the filthy Opening Ceremony at the Asian Games where women skipped around in scantily clad outfits… Without veils!…To the delight of the lustful crowd!

Mahmoud said he left before the skin show.
But, lookie here… This licentious leg-lifter opened up the show. 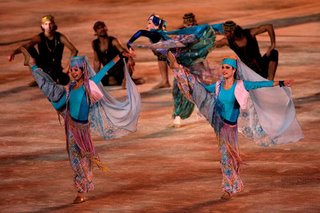 President Mahmoud Ahmadinejad of Iran, who flaunts his ideological fervour, has been accused of undermining Iran’s Islamic revolution after television footage appeared to show him watching a female song and dance show.

The famously austere Mr Ahmadinejad has been criticised by his own allies after attending the lavish opening ceremony of the Asian games in Qatar, a sporting competition involving 13,000 athletes from 39 countries. The ceremony featured Indian and Egyptian dancers and female vocalists. Many were not wearing veils.

Women are forbidden to sing and dance before a male audience under Iran’s Islamic legal code. Officials are expected to excuse themselves from such engagements when abroad but TV pictures showed Mr Ahmadinejad sitting with President Bashar Assad of Syria and Ismail Haniya, the Palestinian prime minister, during last Friday’s ceremony in Doha.

Religious fundamentalists, usually Mr Ahmadinejad’s keenest supporters, are asking why he attended a ceremony that violated his own government’s strict interpretation of Shia Islam.

“The failure of Ahmadinejad to object and his constant presence has damaged the image of Iran’s Islamic revolution and its commitment to Islamic rules in contrast with the Arab countries in the Gulf,” it said.

The president’s aides insist he was not present during the singing and dancing. His press secretary, Ali Akbar Javanfekr, claimed Mr Ahmadinejad had left for Doha airport before the performance.

However, Baztab posted footage which purported to show Mr Ahmadinejad in his seat after the show.

I hope it was worth it, Mr. Sex-On-The-Brain. 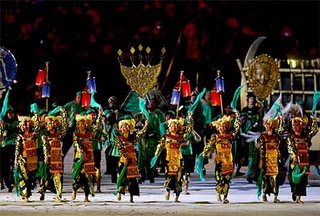 ** HERE is the video clip from Iranian website Baztab of the Asian Games Opening Ceremonies.

And, I suppose this wasn’t you either, waiting for the freak show to start? 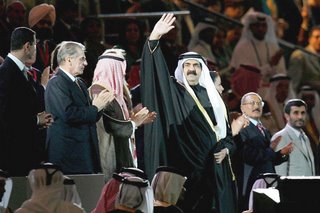 I just hope it was worth it, Mahmoud.