An Astute discovery…
A Danish Art Group that targets world leaders placed this ad in the Tehran Times: 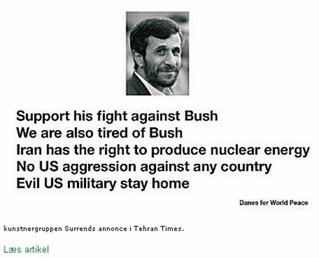 Picture of the advertisement as seen in Jyllands-Posten.

Did you notice anything peculiar about the ad?

Beneath a picture of the president, a series of apparently sympathetic statements were arranged such as “Support his fight against Bush” and “Iran has the right to produce nuclear energy”. The advert was attributed to “Danes for World Peace”.

However, the first letters of each phrase, when read from top to bottom, spell out “S-W-I-N-E”.

The English-language Tehran Times, the conservative daily that printed the half-page advert, had apparently not detected the hidden message. But its impact is likely to be limited as the paper has a circulation of only a few thousand.

“We thought we would poke fun at Ahmadinejad because we don’t think he’s very liberal or sensitive,” said Jan Egesborg, a member of the art group Surrend.

“We think he represents an extreme ideology,” he told Reuters.

Ahmadinejad has been condemned in the West for comments doubting the veracity of the Holocaust and calling for Israel to be “wiped off the map”.

Mahmoud- You’ve been punked!
(You’ve just got to love the Danes!)