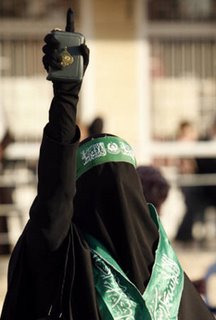 A veiled Palestinian supporter of Hamas holds up a Koran during a rally marking the 19th anniversary of Hamas’ founding in the West Bank town of Tulkarm December 15, 2006. (REUTERS/Abed Omar Qusini)

Even though he does not actually have the power to do this, Palestinian President Mahmoud Abbas called for early elections today on national TV:

Palestinian President Mahmoud Abbas has called for presidential and parliamentary elections to be held at the “earliest opportunity”.
A new poll was the only way to resolve the current crisis, Mr Abbas said.

He was speaking live on Palestinian TV after days of escalating tensions between Hamas and his Fatah movement that have raised fears of civil war.

Hamas, which was elected in January and does not recognise Israel,immediately rejected the call.

” I decided …to call for early presidential and parliament elections,” Mr Abbas said at the end of a major policy speech in Ramallah.

Hamas boycotted the speech as Fatah members rushed into the streets to celebrate:

In the West Bank city of Nablus, hundreds of supporters of Abbas’ Fatah movement rushed into the street in celebration, with dozens of gunmen firing in the air. “Abu Mazen, go, go, we are with you until liberation,” the crowd chanted.

Hamas vehemently opposes new elections, saying it amounts to a coup attempt. “We reject this call and we consider it illegal,” said Hamas legislator Mushir al-Masri.

The call for new elections was expected to further harden the lines between Abbas and Hamas, following days of deadly fighting in the Gaza Strip.

Hamas leaders earlier said they would boycott the speech at Abbas’ West Bank headquarters in protest. Parliament elections were held less than a year ago, and Hamas won by a landslide, trouncing Fatah.

A call for new elections was expected to further harden the lines between Abbas and Hamas.

On Friday, Hamas accused an Abbas ally, Gaza strongman Mohammed Dahlan, of being behind an alleged attempt to kill Prime Minister Ismail Haniyeh of Hamas. In the incident outside the Gaza-Egypt border terminal, shots were fired in the direction of Haniyeh’s entourage late Thursday, killing one of his bodyguards.