What Karl Rove had to say about exit polls with Hugh Hewitt:

On tomorrow’s “reporting” of “early data”:

We should be on guard against dirty data, and we should also be on guard against them attempting to, deliberately or not, to affect the outcome of the House races nationwide, because look, it’s a big country. This thing is going to come down to literally the final seats on the West Coast, and voters, particularly in California, need to know that their vote is going to matter, and that they need to go out and vote, and we need to discourage the national networks from doing what they did in 2000, and that is depressing turnout in the West by prematurely calling the election in the East.

Much more from the interview HERE. 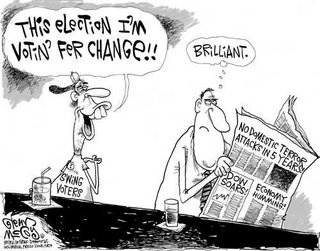 Here are a few things to remember on election day from GOP.com about those election polls you will be seeing today:

In 2002 and 2004, most exit polls in close races bore no relationship whatsoever to the actual result. I have seen too many “surprising” exit poll results showing a Republican 5, 6, 7 points down only to see that candidate win on Election Night. In ’04, even the 5 PM exits (when the exit polls are embargoed until this year) predicted a 3 point Kerry win in the popular vote. Bush won by 3. In 2002, the exit polls showed Elizabeth Dole losing in North Carolina. She won by 9. I could go on and on, but here is the document…

Election Experts Believe Exit Polls Give An Edge And Sway Towards Democrat Candidates.

** Early Exit Polling Returns In 2004 Were Widely Inaccurate, Declaring Sen. John Kerry (D-MA) To Be The Next President Of The United States And Republicans Barely Holding A One Seat Majority In The U.S. Senate.

In 2000, Exit Polling Malfunctioned And Incorrectly Projecting Vice President Al Gore As The Winner Of The Crucial Battleground State Of Florida.

In 2004, Exit Polls “Got All Of The Bush States Wrong” – Predictions Were “Most Skewed” Since Exit Polling Began:

Exit Polls Showed Across-The-Board Failure. “[T]he networks did get the exit polls wrong. Not just one of them. They got all of the Bush states wrong.” (Dick Morris, “Those Faulty Exit Polls Were Sabotage,” The Hill, 11/4/04)

“In The 32 States With Exit Poll Estimates For Both A Presidential Race And A Senate Race The Average Error On The Difference Between The Top Two Candidates Was 5.0 Points In The Democratic Direction For President And 3.6 Points In The Democratic Direction For Senate.” (Edison Media Research And Mitofsky International, “Evaluation Of Edison/Mitofsky Election System 2004 For The National Election Pool,” 1/19/05, p. 20)

NEP’s Exit Poll Projections Had Republicans Winning Only 51 Senate Seats Instead Of 55 Seats They Hold Now!

EXIT POLLS WERE ALSO WIDELY INACCURATE IN 2002 AND 2000 ELECTIONS

FLASHBACK FACT: In 2002 Midterms, Exit Polls Were Scrapped Due To Inaccuracy:

Zogby International’s John Zogby: “The early [2002] exit-poll data was awful. … And it came with the caveat that it was unreliable. Can you imagine a doctor saying that about a diagnosis? What a mess!” (Beth Gillin, “Media Organizations Discuss What Went Wrong With Exit-Poll Service,” The Philadelphia Inquirer, 11/7/02)

In 2000, Exit Polls Were Badly Flawed In Critical State Of Florida. “[S]ome bad assumptions led Voter News Service, the television network exit poll consortium, to make and then retract two dramatic election-night predictions on the winner of the presidential race in Florida.” (Richard Morin and Claudia Deane, “Why The Fla. Exit Polls Were Wrong,” The Washington Post, 11/8/00)

In other words… GO VOTE!