Minority Leader Boehner and Republicans could learn a great lesson from Kazakhstan.
Kazakhstan was having a hard time getting its message out to the masses. Sacha Baron Cohen successfully painted a picture of the Central Asian country into the minds of the American public. It was impossible for this developing country to create an image different than the mostly negative one Borat and the mainstream media created.

So, what did Kazakhstan do?
The Registan explains that Kazakhstan put together a video and posted it on YouTube. The video explains the tremendous economic growth that Kazakhstan is experiencing along with wonderful shots taken from this central Asian country. Kazakhstan went to the internet!
Kazakhstan got creative. 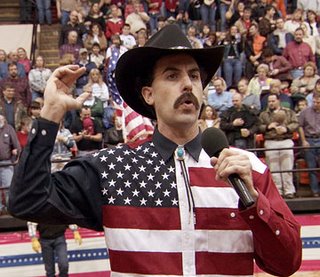 If Republicans want to become the majority party again in America, they need to learn from Kazakhstan!

Today there is news that the Associated Press has been publishing bogus stories from bogus sources for months!

What will Republicans do? Ignore this astonishing news?
This is news that every person in this country deserves to know! The American public has been fed lies from Iraq for months. Americans have been fed terrorist propaganda. Are Republicans going to roll over and wet on themselves or SAY SOMETHING?
(Are there any honest democrats who are outraged about this?)

Kazakhstan went to the internet. What will Republicans do?…
…Keep relying on the mainstream media?

Jim Hoft
Jim Hoft is the founder and editor of The Gateway Pundit, one of the top conservative news outlets in America. Jim was awarded the Reed Irvine Accuracy in Media Award in 2013 and is the proud recipient of the Breitbart Award for Excellence in Online Journalism from the Americans for Prosperity Foundation in May 2016.
Missouri House Approves Annual "Rush Limbaugh Day" to Honor Medal of Freedom Winner
Swiss Diplomat Who Represented Biden Admin Interests in Iran Is Found Dead After Falling from 17th Floor Balcony in Tehran
Team Biden Flogs Russian 'Interference' in U.S. Vote, No Matter What Its Intel Agencies Say
BREAKING... AZ Audit Director Ken Bennett: Dominion Refuses to Comply with Subpoena and Turn Over Password to Their Maricopa County Machines
TOXIC AND UNHINGED: Liz Cheney Went Rogue - Organized Oped Against President Trump in Washington Post with 10 Former Defense Secretaries
See more...