“I am one of the founding members of Vetsforfreedom.org and we’ve been trying to ferret out guys like the one in the McCaskill ad for a while now. We ran an ad in the St Louis Dispatch today in support of Talent.”

Mark Seavey
CIB, Afghanistan
(The clown who took on Murtha and Moran at a townhall meeting is all anyone knows me from)

Right on, Mark!
Here is a shot of that ad from today’s Post Dispatch: 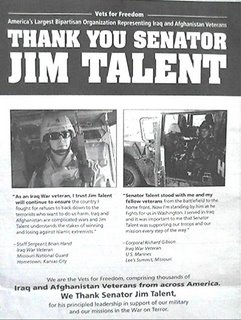 You can donate to Veterans for Freedom Action Fund HERE

The Vets for Freedom Action Fund is a nonpartisan organization established by combat veterans of the wars in Iraq and Afghanistan. Our mission is to support policymakers from both sides of the aisle who have stood behind our great generation of American warriors on the battlefield, and who have put long-term national security before short-term partisan political gain.

Here are the great endorsements for Senator Jim Talent from 2 Missouri soldiers serving their country:

“As an Iraq War veteran, I trust jim Talent will continue to ensure the country I fought for refuses to back down to the terrorists who want to do us harm. Iraq and Afghanistan are complicated wars and jim Talent understands the stakes of winning and losing against Islamic extremists.”

“Senator Talent stood with me and my fellos veterans from the battlefield to the home front. Now I’m standing by him as he fights for us in Washington. I served in Iraq and it was important to me that Senaotr was supporting our troops and our mission every step of the way.”

He stopped through St. Louis where he and Claire talked about cutting and running from Iraq.