Uh-Oh! Bar the White House doors! Call Cheney back from the fields! There may be a violent storm a-brewing!

And this was before John Kerry gifted the Republican Party with his open attack on the military! 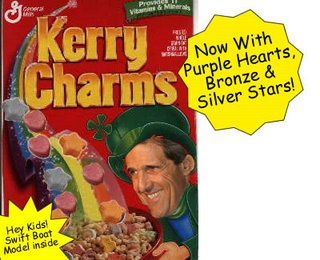 Republicans may have not needed that extra Lucky Charm from John Kerry.
It looks like democrats lost ground drastically in the last month without Kerry’s anti-military public rant!
The Captain broke down the latest
Pew Poll internals:

The last Pew Research poll was taken in early October. In a month, the Democrats have lost non-minorities altogether. The gap among all whites went from +5 Democrats to +5 GOP, a ten-point swing. White females had supported Democrats by a 15-point margin and a majority (55-40), but now give the GOP a 2-point lead. The Democrats have also lost the middle class, a big problem in this election.

Households earning between $50K-$75K and $30K-$50K have both slipped to the GOP. The former switched from a 14-point margin for the Democrats to an eight-point Republican lead, while the latter has had an even more dramatic shift. Those earners had favored Democrats by 22 points, but now go Republican by 3. The Democrats even lost the tie they had with earners above $75K, and now trail there by seven. They did extend their margin for earners below $30K from 25 points to 30.

It looks like Democrats can take conspiracist Nancy Pelosi out of the closet now.

Dan Riehl has more including this: “Color me suspicious, but how many people have been pumping a big Dem wave for a month and are now forced to get realistic so as to not blow their credibility post-election.”

AJ Strata has much more on the latest polls.

“The current average Democrat lead—six points—is the same as it was in 1998, when there was minimal change in the balance of Congress.”

No wonder the dems have already moved to Plan B!

Update: This may explain why democrats like Kerry loathe the military.

Are we looking at a Dewey Defeats Truman, Redux?