They call him “Lucky”…

I thought that it would only be fair to introduce you to one hero who survived such an attack. 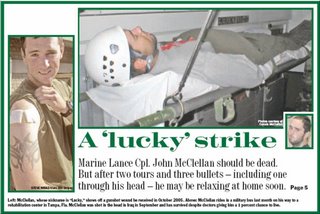 George Lauer sent this news and photos of John from his military family in Columbia, Missouri:

Got these from a friend. You won’t see these kind of things on CNN or in a “Claire” commercial. These are photos of a sniper victim soldier getting good care and taking his first steps. Please keep this patriot in your thoughts and prayers!

With permission from the McClellan family I am reprinting the story here of this young Missouri hero. 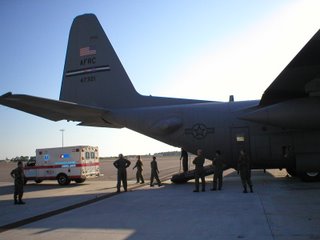 The ambulance is on the runway ready to transport Lance Cpl. John McClellan to the hospital in Florida.

The third time he was shot was the luckiest day of Lance Cpl. John McClellan’s life.

A sniper’s bullet somehow flew barely under the Marine’s helmet, hitting just above his left ear. It severed facial nerves and parts of his ear, ripped a hole in the lower section of his skull and brain, and tore its way out through the back of his neck.

But it missed his carotid artery by the thickness of a few sheets of paper. And it missed vital sections of his brain. It missed his vision and vocal controls, too.

And it didn’t kill him. 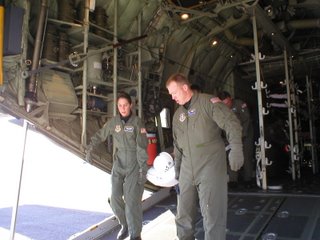 More from the Stars and Stripes:

McClellan is recovering at a rehabilitation center in Florida, and his family is thanking God and the military medical system for his survival.

Doctors told his family that 99 of 100 patients with similar injuries die. But he was the other one.

The irony is that the 20-year-old McClellan was known as “Lucky” by his fellow Marines even before his latest miracle.

In October 2005, Stars and Stripes ran a story about how members of Company E’s combined anti-armor team, 2nd Battalion, 3rd Marine Regiment, 3rd Marine Division had been teasing McClellan for getting shot twice in one week during patrols in Afghanistan.

Those two hits were both in his right arm, one near the wrist and the other by the shoulder. Both were superficial, and earned him the nickname of “bullet sponge” from his relieved teammates.

He even joked with Stripes then that “the third time’s a charm.”

McClellan finished that tour of duty in Afghanistan without any more close calls. He returned home, then redeployed to Iraq this September. 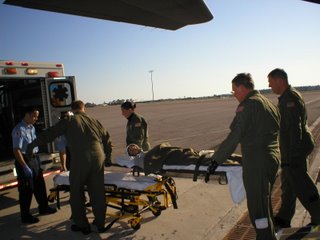 John, “Lucky”, is moved into the ambulance in Tampa.

He had been in Haditha for less than a month when that third time came.

“I really don’t remember any of it,” he said. “I was standing post in a tower with another guy. The next thing I remember is waking up in Bethesda three days later.”

The Marines told him an unlucky shot from a hidden sniper took him down. As corpsmen rushed to McClellan’s aid, his teammates delivered a fatal volley to that shooter.

In those missing three days, McClellan was sped from the tower triage to an field hospital, then to Germany and back to the National Naval Medical Center in Maryland. He has gotten a chance to thank a few of the doctors who worked on him, but most of them never saw him conscious. 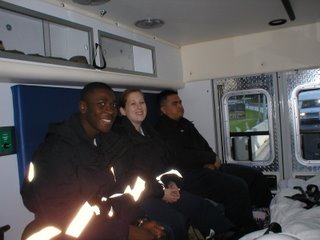 The ambulance nurses from Bethesda to Tampa, Florida.

John is doing great and may return home to COlumbia, Missouri by Thanksgiving:

“Now he might have to wear a hearing aid for his left ear, but his vision is fine,” she said. “That’s a problem, but considering the injury he had, we’re on cloud nine.”

McClellan still has to regain strength in nearly all of his muscles and may need to have a nerve transplant to regain motion in the left side of his face. He expects he’ll have to finish his military career in a desk job if he isn’t medically retired.

His mother, who can joke about the situation now, said he’ll never return to combat “because I told him if he does, I’ll kill him.”

Either way he faces months of recovery, but that’s going so well so far that two weeks ago doctors moved him down to Florida to begin his rehab work, and therapists there think he’ll be able to go home to Columbia, Mo., by Thanksgiving.

When that happens he’ll be able to show off his third Purple Heart, too, presented to him before he left Bethesda. His mother has been carrying around the first two since he was hurt. 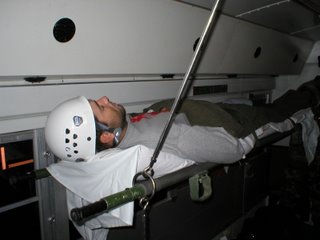 The ambulance from Bethesda to Tampa, Florida where John is recuperating.

Another Marine mother, Nilda Anes of McAllen, Texas, contacted the McClellans on Tuesday by phone to deliver a message from her son, Cpl. Mario Anes, who was next to McClellan when he was hit.

“His mission was to find out how John was doing,” Anes said of her son in a phone conversation. “His message to John at the time was everyone was praying for him.”

This was emailed out yesterday, on Friday November 3, 2006, from Connie McClellantrong>, John’s mother:

Yesterday, John walked 380 steps in his walker. The day before was 300; before that 200; before that 150; before that 80. EVERY day he’s gaining more strength and more balance. Yesterday he was able to stand without assistance, and without losing his balance for over 10 seconds. That doesn’t sound like much to us, but trust me………………..that is HUUUUUUUUUUUGE!!

We are THRILLED with the progress. He is truly having to learn to walk again, but he’s doing great.

Also, he has GAINED 10 lb’s just in the past week!

Connie McClellan also asks that you please pray for her son, John:

And, in the meantime, Lord, we thank you that you continue to watch over his buds in Haditha. We ask this in the precious name of Jesus, Amen.

Dr. Rusty Shackleford at The Jawa Report has background on the Iraqi snipers.