Pakistanis rallied in Islamabad today to “Congratulate the Democrats and the First Muslim elected to Congress” in the United States. 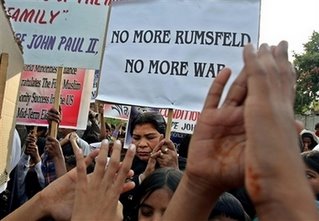 Pakistani Christians pray for the U.S. Democrats at a rally in Islamabad, Pakistan, Thursday, Nov 9, 2006. (AP)

Charles Johnson has more on the first Muslim to be elected to Congress democrat Keith Ellison:

The first Muslim elected to the United States Congress is a Democrat from Minneapolis with ties to an Islamic group that supports terrorism and a radical cult whose leader says God will destroy the entire white race and establish a paradise nation ruled by blacks.

Minnesota’s new Representative in the House, Keith Ellison, was endorsed and partly financed by the Council on American-Islamic Relations (CAIR), a massive U.S.-based organization that avidly defends Osama bin Laden and other militant Islamic terrorists and considers U.S. action against terrorists anti-Islamic. In fact, the group demanded the removal of a Los Angeles billboard describing bin Laden as “the sworn enemy” because it was “offensive to Muslims.” 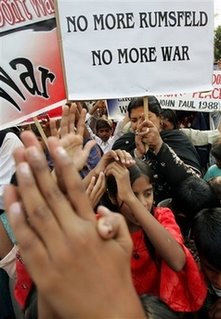 Pakistani Christians pray for the U.S. Democrats at a rally in Islamabad, Pakistan, Thursday, Nov 9, 2006. Democrats won a 51st seat in the Senate and regained total control of Congress after 12 years of near-domination by the Republican Party. Participants of a rally cheered the resignation of U.S. Defense Secretary Donald Rumsfeld. (AP Photo/B.K.Bangash) 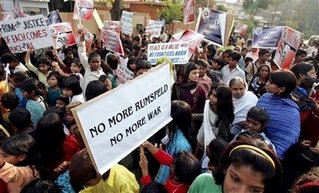 Iran and Syria also celebrated the democratic gains as well as Hugo Chavez in Venezuela.

Director Blue has the Axis of Evil on the phone line.

And… the jihadists are celebrating at the Boston Globe.