Sadly, it’s no surprise that a story like this was somehow missed by the biased mainstream news…

Senator John Kerry had a few choice words for our troops back in late October:

“You know, education, if you make the most of it, you study hard, you do your homework and you make an effort to be smart, you can do well. If you don’t, you get stuck in Iraq.” This is a photo of one of those poor suckers “stuck in Iraq.”

Well, Democracy Project sends this heartwarming story about one Kerry’s dummies in Iraq… 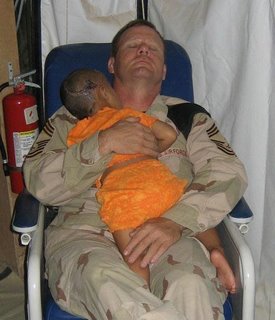 The picture was taken in October 2006, while Sgt. Gebhardt was deployed to Balad Air Base in Iraq. According to the Air Force Print News, the infant girl Sgt. Gebhardt held in his arms “received extensive gunshot injuries to her head when insurgents attacked her family killing both of her parents and many of her siblings.”

John Gebhardt volunteered at the local hospital where he was stationed in Iraq and he was not alone:

While deployed to Iraq, the chief tried to help out any way he could. He figured holding a baby that needed comforting that would free up one more set of arms that could be providing care to more critical patients.

“If I have an opportunity to help out, I look for that opportunity,” he said. “They had more than enough to do.”

The chief was not alone in volunteering at the hospital. There were more than 800 different volunteers at the hospital during the time he was deployed to Iraq, he said. Some of them volunteered so much that he mistakenly thought they were assigned to the hospital.

And it is the chief’s hope that families in Iraq will receive the same kind of support in the future. They are just like American families, Chief Gebhardt said.

“I pray for the best for the Iraqi children,” he said. “I can’t tell the difference between their kids and our kids. The Iraqi parents have the same care and compassion for their children as any American.”

“The Senator’s suggestion that the men and women of our military are somehow uneducated is insulting and it is shameful. The members of the United States military are plenty smart, and they are plenty brave, and the Senator from Massachusetts owes them an apology. (Applause.)”

Yes, Mr. President… They are plenty smart, plenty brave… And, they also have plenty of heart!